Sundance: The long-awaited followup is a gorgeous continuation of the “Beasts” aesthetic.

Zeitlin’s wondrous “Pan” riff feels like such a natural continuation of the “Beasts” experience that it practically unfolds in the same immersive universe — pensive voiceover paired with overwhelming, expressionistic bursts of storybook imagery — taking this unusual epic into abstract places where fantasy gives way to the ominous challenges of the adult world.

As usual, mileage will vary when it comes to Zeitlin’s “Terrence Malick for kids” aesthetic, which turns on awe-inspiring cues at every turn, and sometimes threatens to turn into a parody of that very thing. But there’s an undeniable skill to enacting such a distinct symphony of ethereal rhythms, and “Peter Pan” provides a natural template.

“Wendy” is a more grounded work than “Beasts,” but altogether similar as a meandering, soulful parable. Expanding on the source material while solidifying Zeitlin’s homegrown motifs, “Wendy” provides the kind of alternate approach to Disneyfied storytelling — ironically, in the context of a movie produced by a Disney entity — that heightens its cinematic potential with delicate and often compelling results.

As its title implies, “Wendy” revises the original narrative from the perspective of Peter’s winsome female companion. Just as “Beasts” brought the world a genuine discovery in eight-year-old performer Quvenzhané Wallis, “Wendy” restricts most of its narrative to a handful of intriguing child actors, beginning with remarkable newcomer Devin France in the title role. The soft-spoken girl grows up roaming the countertops at a no-frills Louisiana diner, situated on the edge of train tracks that hover on the cusp of a muddy bayou, and watches the vast machines come and go through the small window that represents her sole entry point to the outside world. The first act of “Wendy” enacts an alternative to the eruption of an ethereal universe in the opening minutes of “Beasts”; Wendy’s world is grounded in a drab setting where the mysteries of another life call to her in sudden glimpses.

One day, Wendy sees a local kid grab hold of the train and vanish. As the years pass and the disappearance remains unsolved, Wendy’s routine hasn’t changed: Her single mom (Shay Walker), a jaded waitress with an unseemly past, lets her three kids roam the diner at will, and regales them with after-hour stories of her old exploits. Wendy’s two older brothers (Gavin and Gage Naquin, also standouts) mock their sister for her curiosity about life beyond their insular surroundings, but she remains undeterred.

The narrative shifts into familiar “Pan” gear once “Wendy” spots a strange child-shaped shadow on her bedroom wall as the night train rattles past, and hops out the window to climb aboard; her mystified siblings follow suit, and the trio finds themselves face to face with a radical reinvention of literature’s most famous rascally hero: Peter (Yashua Mack), a petite black child with a mischievous smirk, welcomes his new entrants to Neverland aboard. 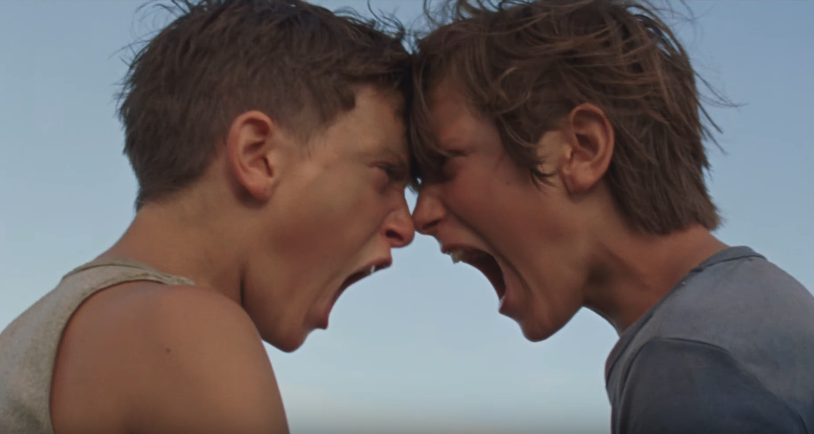 The movie’s remarkable opening epitomizes Zeitlin’s absorbing handcrafted style: the train chugs along, the voiceover kicks in, and the landscape speeds past as the music swells, creating the impression of traveling to some distant land even as flashes of familiarity peek in. But once Peter sends his new recruits hurtling into muddy waters, they find themselves in the midst of a whole new world. The green island jungle of Neverland is loaded with active volcanoes that Peter and his Lost Boys seem to control through telekinetic powers, and Wendy soon notices that the children don’t age.

Before that familiar logic has time to settle in, Zeitlin tosses in a whole new mystical revelation — the existence of a glowing undersea being known only as Mother, who seems to be the source of all the island’s magic, as she roams the underground caves with a benevolent gaze. A natural extension of the horned aurochs at the center of “Beasts,” Mother is an entrancing creation who looks like old rags heaped onto a giant lizard and cast in neon lights. The image is at once a touch disturbing and somewhat ridiculous, but the rascally Peter’s bond with the creature imbues it with feeling.

As with Wallis in “Beasts,” Mack doesn’t seem to be performing as Peter Pan so much as he merely exists in this oddball backdrop, frolicking about with a carefree energy the kids quickly embrace. (One might argue that Mack, a local discovered by the filmmakers on a nearby island, isn’t even acting at all.) While Louisiana served as the setting for the fairyland realm of the Bathtub in “Beasts,” the new movie uses the expansive landscapes of the Caribbean to imbue the proceedings with a spiritual tranquility that lingers in every shot. Though Zeitlin goes overboard with a few too many aimless montages of children zipping through the thick foliage with glee, it’s all too easy to settle into this spell just in time for a more dangerous reality to take over.

For all the changes Zeitlin makes to the material, he hasn’t abandoned Captain Hook, though the nature of the antagonist arrives from an unexpected direction that speaks directly to the movie’s deeper themes. The children find themselves confronted with a terrifying threat — the potential to age when they lose faith in the powers at play — and as sudden violent circumstances force them into a less welcoming side of the island, “Wendy” gets serious, building to a thrilling climax. With the arrival of an aging exile (Lowell Landes), the kids learn what can happen when the world catches up to these eternal children, and he’s not the only victim. Zeitlin’s ability to capture wistful characters struggling with mortality is unparalleled, and here he presents the aging process as a profound quest to keep hold of a world on the verge of evaporation. 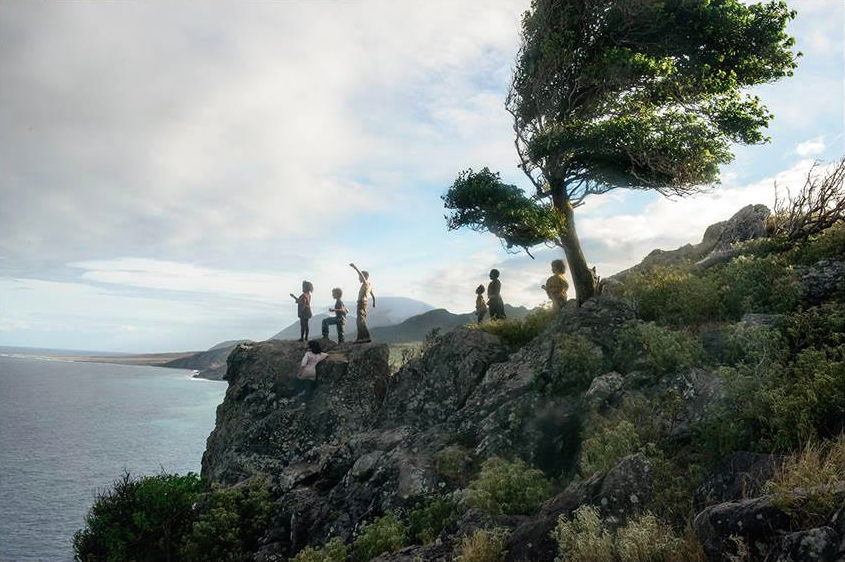 Even viewers put off by Zeitlin’s precise approach will marvel at its craftsmanship. Cinematographer Sturla Brandth Grøvlen (who also shot the astonishing one-take heist thriller “Victoria”) wanders the raggedy environment with an acrobatic camera, while editors Affonso Gonçalves and Scott Cummings assemble Zeitlin’s Malickian flow of images with a relentless ability to keep the sense of intrigue in play; the euphoric score, co-written by Zeitlin and his “Beasts” collaborator Dan Romer, chases the young adventurers at every turn.

Of course, there’s an inherent danger to depicting a world of wonder and decay with people who come from the margins of society. The movie dances around the same inevitable critique that dogged “Beasts,” once again risking criticism of poverty porn and especially racial appropriation, since it features a literal magical black man in the role of Peter. But that issue becomes more distant as the movie directs its concerns elsewhere, and Peter’s specific background grows indistinct amid an island populated by faces that evoke a range of people and places, united by their sense of alienation from the rest of the world.

While “Wendy” staggers a bit in its plot-heavy midsection, Zeitlin often rejuvenates the story with visionary asides, including an imaginary dance without music that plays like a meta-commentary on the filmmaking on display. The movie’s climax eschews logic and doesn’t quite fit together, but nevertheless juggles several unexpected twists before circling back to familiar terrain. Zeitlin, who co-wrote the screenplay with his sister Eliza, does a better job of assembling the majestic flow of the story than giving his characters much in the way of meaningful dialogue. Nevertheless, when Wendy finally calls for “real, adult help!”, it breaks through the exhilarating surface to inject real urgency into the climactic act.

As with David Lowery’s transportive live-action remake “Pete’s Dragon,” Zeitlin has taken an overwrought children’s story and given it a fresh identity without toppling the original’s core ideas. “Wendy” winds up right back where it belongs, with a reminder that not everyone can remain within the confines of child’s play forever. As with the Bathtub of “Beasts,” Zeitlin drops his audience straight into the sights and sounds of Neverland.

Once again, the experience is tinged with the melancholic observation that no measure of childlike wonder can slow the inevitability of growing up. “Wendy” doesn’t take the appeal of “Beasts” in a new direction, but it clarifies its strongest qualities. Zeitlin’s roving narrative techniques may have their limitations, but this spellbinding followup proves they still have juice. Everyone grows up, but the “Beasts” formula has yet to grow old.

“Wendy” debuted at the 2020 Sundance Film Festival in its Premieres Section. Searchlight Pictures releases it theatrically on February 28, 2020.