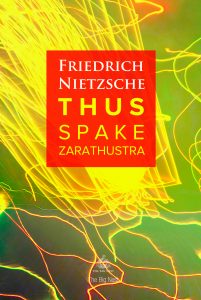 The book chronicles the fictitious travels and speeches of Zarathustra. Zarathustra’s namesake was the founder of Zoroastrianism, usually known in English as Zoroaster. Nietzsche is clearly portraying a new or different Zarathustra, one who turns traditional morality on its head.

Thus Spake Zarathustra: A Book for All and None by Friedrich Nietzsche