Christopher Nolan’s movie makes history as the first blockbuster to be released during a pandemic.

“Tenet” will gross $20.2 million domestic through Labor Day, per Warner Bros. That number does not represent only the weekend; it reflects the entire engagement, including 13 days in Canada (where multiple sources tell IndieWire it may have grossed $2.6 million its first weekend, unconfirmed by the studio) and eight days in the U.S.

In a statement to the press, the studio asks that reaction be placed in this light:

Domestically, while our results show positive like-for-like theater indicators compared to previous films such as “Dunkirk,” there is literally no context in which to compare the results of a film opening during a pandemic with any other circumstance. We are in unprecedented territory, so any comparisons to the pre-COVID world would be inequitable and baseless.

Operation Christopher Nolan to the Rescue achieved its most important goal. It played in 2,810 theaters in the U.S. and Canada. Without specific daily or weekly numbers, and adding Labor Day, we are left to speculate what this means.

Warners also revealed new international numbers, with China and Russia the major new openers this week. The total worldwide through Sunday is $126 million (double the first weekend, with three major territories added since), with an estimate of $146 million through Monday.

China led the way, with a quite decent $30 million; it’s the best opening of a Nolan film there. (Though the first weekend of “Interstellar” is not available, its first full week was $42 million). This number, though not massive for the country, is probably the most encouraging figure seen so far for the film.

Given all the barriers, $146 million is also positive. The film was never going to gross anything close to its potential under COVID-19 conditions. It’s still early, and as holdovers amass in coming weeks will give us a better sense of where it will land.

Our initial, very broad range of total estimates ranged from $250 million to $600 million worldwide; these numbers suggest it should pass $300 million. That itself would be a victory, though to achieve profit ($205 million production cost, easily at least half of that in marketing expense) would mean the film would need a huge post-theatrical afterlife to get into profit.

For holdovers, three countries reported second-weekend drops from their initial Friday-Sunday. However, these opened earlier in the week, so they are not a true tell. In any event, Germany, France, and the U.K. all grossed in the $2.8 million – $2.9 million range, with respective drops of 24, 53, and 35 percent. Respectable, but it doesn’t reflect a resurgence.

Again, that is far less the central point than helping get theaters back on their feet. It is appropriate for Warner Bros. to celebrate this, as is the request that analysis not rush to judgment. However, that also means avoiding an assumption of the best possible view. There are ways to estimate the three-day number, excluding the grosses before Friday and Labor Day; the challenge is to fairly describe what that means.

We do know this: Sources suggested last week that $20 million would be considered a good opening weekend. On that count, it fell short.
The last-minute rush of theater reopenings in New Jersey, Maryland, and San Diego County (itself more populated than 17 states) likely was prompted in part by a perceived major release. Whatever the reaction to the gross, Warners’ leadership in taking this risk (further emphasized by Disney taking “Mulan” to very Premium VOD at the same time) was critical to theaters‘ rebound potential. Around 70 percent of Canada and the U.S. are open. In the U.S. alone, 65 percent of the theaters are now open, with multiple areas (including most of California and New York) still closed.

Otherwise, It’s Labor Day weekend, the doormat of holidays for theatrical release. Normally, it’s the last hurrah for vacations and outdoor activity. Football is front and center; beyond that, schools starts in earnest and it’s often the lowest-grossing month of the year. Not a time to release top films.

That said, the Friday-Sunday of last year provided $91 million in domestic gross. This year, with “Tenet” included, it looks like the amount will be around $18 million-$22 million. As a head-to-head comparison that’s misleading at best, but it still represents a problem.

Theaters have expenses: Landlords need to be paid, staff are on salary, and a majority of the ticket sales go to studios (“Tenet” sees over 60 percent). They can operate on a loss for a short while, but this is likely as good as it is will get for at least a month. That’s scary

Although Warner Bros. is holding figures essential to analyzing grosses, give them credit for transparency with the Cinemascore. It’s a B, and in their easy grading scheme that’s mediocre. Of the 10 highest grossing films released early this year, four were A or A-, two others B+. B is the score of “Dolittle” and “Like a Boss” (“Fantasy Island” at C- made the list of highest grossers close to by default, with only $22 million).

To be fair, idiosyncratic directors with a distinctive style often rate lower (“Once Upon a Time in Hollywood” also got a B). But it is the lowest grade a Nolan film received since he broke into blockbuster circles. It’s also surprising since circumstances mean those venturing into theaters have a higher degree of interest.

On a weekend when “Tenet” faces “Mulan” on Premium VOD at Disney+, the latter opened in theaters in a few international territories. These aren’t the big ones; China and Russia debut this Friday. It grossed $5.9 million, taking #1 in the UAE, Thailand, Singapore, and Malaysia. All opened “Tenet” last weekend; absent any specific numbers, we can’t directly compare. Disney reports that in Singapore and Thailand, “Mulan” had the biggest opening this year. That would include Nolan’s film.

Again, we lack a quorum of first-run releases to present a normal top 10. These are estimates for the three-day weekend and as usual Labor Day likely to gross much higher than a normal Monday.

The gap between “Tenet” and the holdovers is steep. This isn’t surprising. The disappointing news is even with a major new title, the numbers don’t give a sense that theaters are coming back. Or, just as likely, the titles themselves aren’t strong enough to lure audiences back in.

“Unhinged” (Solstice), in third, continues to hold. In its third U.S. weekend (a week more in Canada), it took in a little under $1.7 million, off 35 percent with $11.3 million so far. With its early release and decent holds this has a respectable take, but it looks to fall short of the stated goal of $30 million domestic. 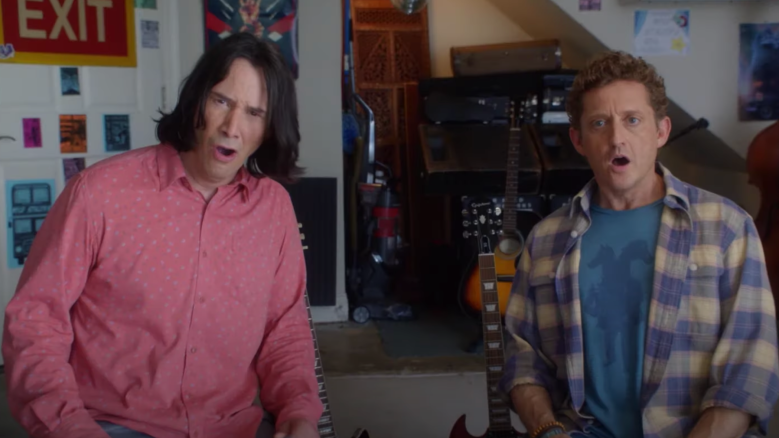 “Bill & Ted Face the Music” (United Artists), riding high in PVOD sales, isn’t reporting again. Best guess is that it took in around $600,000 in 953 theaters (about a third as many as “Mutants”) for #4. Its theatrical take so far is around $2.2 million in addition to its much larger (but unreported) home-viewing total.

In Canada only, “The SpongeBob Movie: Sponge on the Run” (Paramount) added $345,000 to its previous three weeks, That’s a total of about $3.7 million there. It will get U.S. exposure streaming next year.

More theaters will open this Friday, including the whole state of North Carolina, the Philadelphia region, more in New Jersey that couldn’t make it by this weekend.

What is critical now ahead is to see whether top films announced ahead, led by “Wonder Woman 1984” (Warner Bros.) stay in place (there has been no indication from the studio it won’t), and how “Tenet” holds ahead. These grosses spell neither victor nor gloom for the industry. Like everything else in the COVID-19 world, we are in totally uncharted territory.