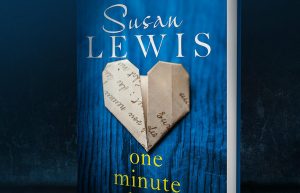 Susan Lewis is a British author living in the west of England.  Susan wrote 26 novels  as well as an autobiographical memoir – Just One More Day with a follow up memoir One Day at a Time. Her novels were nominated for the Romantic Novelists’ Association’s Romantic Novel Of The Year award several times.

Lewis was educated at The Red Maids’ School in Bristol, England. After several temporary secretarial jobs she worked at the television network HTV in Bristol, then moved to London to join Thames Television to work in news, current affairs, light entertainment and drama. She knocked on the Controller’s door to ask what it takes to be a success. He told her: “Oh, go away and write something”. Her first novel, A Class Apart was published in 1988. She has since published a further 27 novels.

Vivienne Shager has it all. A highflying job. A beautiful apartment. Friends whose lives are as perfect as her own. But on the afternoon of her 27th birthday, Vivi has a heart attack. Now Vivi’s life shrinks back to how it begun, as she moves back to the small seaside town she grew up in. With her time running out, there is one thing she wants to know the truth about.

Thirty years earlier, Shelley’s family home, Deerwood farm, bursts full of love and happiness. But one family member has hidden a secret for all these years. Until Vivi comes home demanding answers, and it takes just a moment to unravel the lie at their heart of their lives…

Get the book from Amazon: https://amzn.to/2prfEuQ