Premiering last January amidst the relative dead zone for TV, “Sex Education,” the sweet sex-positive comedy about a sensitive teenage boy and his sex therapist mom, instantly soared its way into our hearts. Otis (Asa Butterfield) proved a charming enough protagonist, but it was the eclectic ensemble of lovable characters surrounding him that made “Sex Education” the best teen comedy the U.K. has produced since “Skins.” As Otis’s mother, Jean, Gillian Anderson reminded us that she can do more with a strategically raised eyebrow than most actors do with an entire monologue. As “Skins” did for Nicholas Hoult, Dev Patel, and Hannah Murray, “Sex Education” introduced exciting new talents in Ncuti Gatwa, whose dazzling smile and infectious laugh made Eric one of the best gay characters on TV, as well as the darkly captivating Emma Mackey and the sublimely bizarre Tanya Reynolds.

The eight-episode second season, which Netflix released in full on January 17, builds beautifully and confidently on the strengths of the first, while fleshing out the world of Moordale High and its cinematic fictional town. Creator Laurie Nunn deftly fleshes out favorite supporting characters from last season, such as Ola (Patricia Allison), Jackson (Kedar Williams-Stirling) and Lily (Reynolds), while mixing it up with compelling new characters like the nerdy Viv (Chinenye Ezeudu), swoon-worthy Rahim (Sami Outalbali), and sneaky Isaac (George Robinson).

The season opens on the heels of a chlamydia outbreak at Moordale, which has students, teachers, and parents alike awash in panic. Having shuttered his amateur sex therapy business after falling out with Maeve, Otis is forced out of retirement in order to assure his compatriots that no, you cannot spread chlamydia through breathing on someone. When Jean is called in as a consultant, Otis is not only worried she will find out his secret, but take his business. He is forced to make up with Maeve, at least for a little while, in order to keep the money rolling in. 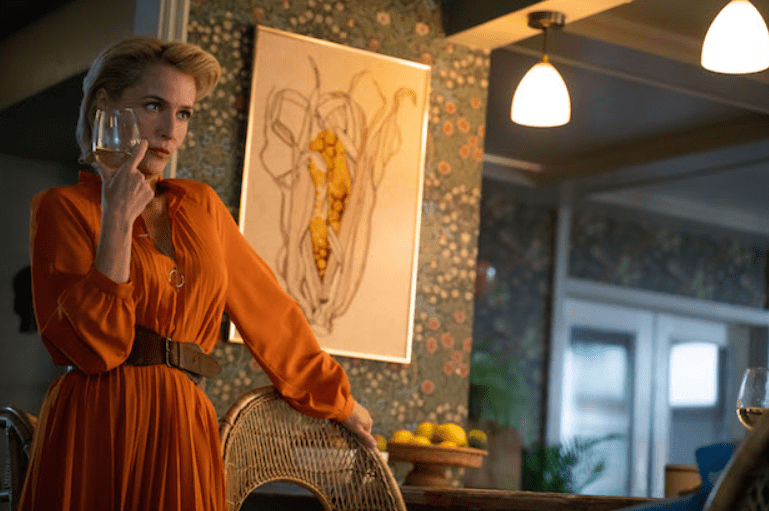 But at what cost? Otis is so busy sulking about his mother’s relationship with Jakob (Mikael Persbrandt), his girlfriend’s dad, that he completely ignores the fact that his friendship with Maeve is the only real threat to his connection with Ola. Meanwhile, Jean’s many years of single bliss have left her unprepared her for this hulking Swedish man and all the space he takes up — power tools and all. Not to be forgotten, Eric is being wooed by hot new French guy Rahim (Outalbali), though he can’t stop smiling when closeted bro Adam (Connor Swindells) gives him the time of day.

If the show has any weak points, it’s that almost every major conflict this season revolves around characters choosing between two love interests, which would be a forgivably predictable trope if it didn’t occur a dizzying four times. (Otis, Eric, Ola, and Jean all face such dilemmas at various points in the season.) In fact, aside from a tepid sub-plot involving Adam’s mother Mrs. Groff (Samantha Spiro), “Sex Education” is a bit too focused on romantic coupling for such an otherwise progressive show.

For this reason, one of the most heartening storylines this season is the athletic Jackson’s budding friendship with Viv, a nerdy quiz team member he convinces to tutor him. (Though by season’s end, even this platonic palate cleanser seems to be heading the way of romance.) Their odd couple friendship blooms from a “Cyrano de Bergerac”-inspired storyline, wherein Viv agrees to tutor Jackson in Shakespeare in exchange for love advice. Newcomer Chinenye Ezeudu is hilarious as Viv, displaying physical comedy chops as she runs into bookshelves or knocks over boxes every time she sees her crush. It’s refreshing to see a young actor like Ezeudu in such a prominent role, and casting her as an awkward genius flouts some of TV’s most outdated and insidious conventions. Though it’s stubbornly pro-romance, “Sex Education” sure knows how to build a long-simmering crush. Those rooting for Otis and Maeve will be disappointed in Otis’s behavior this season, though it has benefit of giving Maeve an identity outside of mere love interest. Nunn doesn’t balk at making Otis less likable this season (he is, after all, a teenage boy), and a fraught relationship with his playboy father is a cogent and sympathetic justification for his idiocy. Plus, by drawing out the central love story, Nunn gives herself plenty of wiggle room for a potential third season.

The show excels in other unexpected ways, such as with its colorful costume and set design and scenic cinematography. The show is shot in the Wye Valley, a protected landscape on the border between England and Wales. Smooth aerial shots follow Otis’s bike rides as he passes lush greenery and glinting rivers on the way from his rustic cottage house to Moordale’s idyllic brick campus. Each character dons a signature costume piece, such as Jean’s fabulous jumpsuits, Ola’s rainbow stripes, or Rahim’s weathered bomber jacket. Combined, the scrumptious visuals create a familiar and specific universe for the characters to live in, protecting them from the outside world.

As such, the more aspirational elements of “Sex Education” — its natural queerness; wide array of races, ethnicities, bodies, and religions; and sex-positivity — seem that much more realistic, even though the real world is far more complicated. “Sex Education” imagines a more colorful, more livable, and more loving world. Even if it wasn’t also hilarious, charming, and chock full of heart, that would be reason enough to love it.

All eight episodes of “Sex Education” Season 2 premiered on Netflix on January 17.