‘Picard’ Review: Star Trek Revives ‘The Next Generation’ for Streaming

Captain Jean-Luc Picard is back! The CBS All Access series sends the retired captain on a return trip to space. And that’s pretty much it.

What’s to say about “Picard” that a) can be said, given this review is a spoiler-free zone, and b) needs to be said, given CBS All Access is ostensibly reviving one of the “Star Trek” franchise’s most-utilized captains, and thus rebooting one of the fandom’s favorite shows? Of course, the question can apply directly to the man himself: What’s left to say about Picard that hasn’t been said in seven seasons of great television, four films of vastly disparate quality, and innumerable appearances in “Star Trek”-related stories?

Saddling the pure-of-heart, bald-of-head leader with fresh baggage and renewed purpose should motivate most prospective viewers to say “engage” each week of this 10-episode ride, but there’s a lingering feeling of missed opportunity hovering over our initial re-entry. “Star Trek: Picard” may represent a new chapter for Patrick Stewart’s beloved Jean-Luc, but it’s not trying to enlist new fans as much as it’s catering to old ones.

For franchise die-hards, that’s likely OK. Showrunner Michael Chabon and fellow executive producers Akiva Goldsman, James Duff, and Alex Kurtzman are polishing up an old model for fresh use. “Next Generation” regulars Brent Spiner (Data), Jonathan Frakes (William Riker), and Marina Sirtis (Deanna Troi) all return — in roles of varying significance and screen time — along with “Voyager” star Jeri Ryan (Seven of Nine), for another purposeful, morally sound mission. For the past let’s-not-say-how-long, Jean-Luc has been out of Starfleet. The Admiral retired after the destruction of the planet Romulus (as seen in J.J. Abrams’ 2009 “Star Trek” reboot) and the earlier death of his friend and Commander, Data (in “Star Trek: Nemesis,” the worst of Picard’s films).

He’s been living a secluded life of leisure at his family’s vineyard when the anniversary of the above tragedy (Romulus, not Data) triggers a renewed interest in the Admiral. Soon, he’s visited by a young woman in need of his help, and the call to action, paired with a jarring reminder of his inactivity, send him back to work. 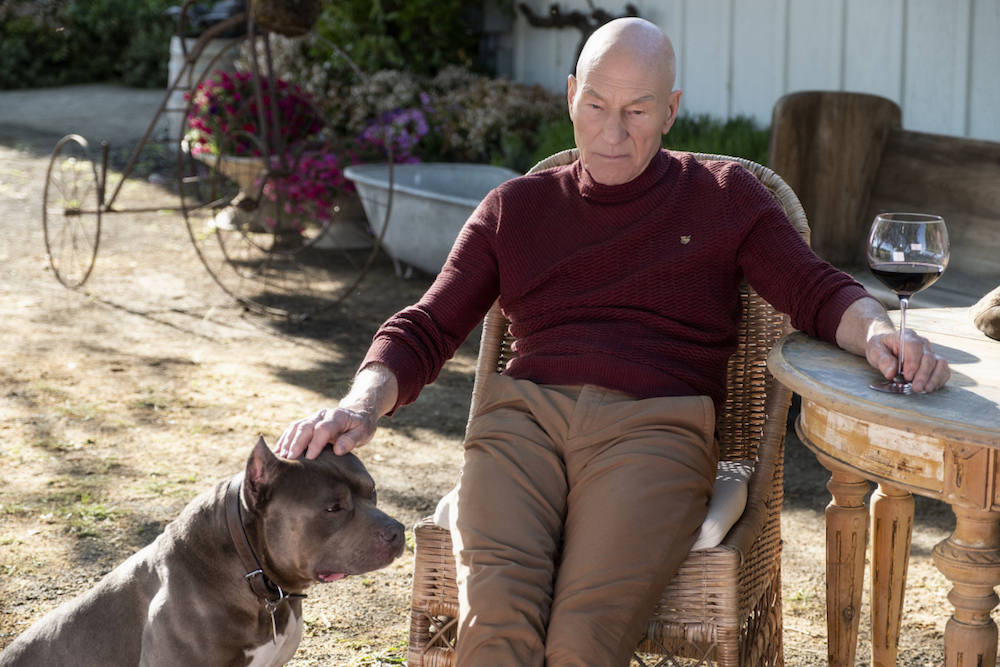 Sir Patrick Stewart and No. 1 in “Star Trek: Picard”

And, that’s pretty much all I can say. Though the first episode will be available by the time this review rolls out, much of the fun within “Star Trek: Picard” lies in rediscovery. Sure, there are some snazzy, modern-era special effects, a new cast, and Picard now has a very good dog (who goes criminally underutilized). But “Picard” tells a familiar Trekian story (even if it’s rated TV-MA) that lets you check in on old crew members two decades later, and basks in the glory of Sir Patrick Stewart. The Shakespeare-trained star has a unique ability to dial into his roles without completely disappearing, carrying the audience’s earned investment from role to role, whether he’s suffering through an awkward trip to the toilet or sipping tea among the stars.

Here, he yet again finds conviction and depth within line variations he’s said one-thousand times: “We have to help,” “What could that mean?”, and “Good boy, No. 1” (OK, maybe that one’s new) all come across as enlivening with such a dedicated actor at the helm, as Stewart slides back into his captain — er, admiral — boots with ease. The show around him may look different, but the producing team knows Stewart, and the story will feel very familiar to fans — so much so, many of the biggest twists and reveals aren’t even explained for new viewers; not only does “Picard” stretch to connect Jean-Luc’s movies with the recent reboots, but the first episode ends on a kicker only Trekkies will understand.

Far be it for a casual fan like me to compare “Star Wars” and “Star Trek” (even if J.J. did it first), but seeing Jean-Luc again reminded me of seeing Luke Skywalker at the end of “The Force Awakens.” Just glimpsing the aged face of a pristine, unquestioned hero from yesteryear was enough to bring back childlike memories of simpler times, when shades of gray never reached the silver screen’s bigger-than-life heroes. Picard made tactical errors and a few other blunders in the past, but he’s still a mythic persona; a hero from the time of heroes.

Yet even more satisfying than pretending like perfection is attainable for those unimpeachable figures was seeing Luke’s weakness in “The Last Jedi.” Without spoiling anything, let’s just say there’s an opportunity in “Picard” for Jean-Luc to legitimately consider if he made a mistake, if his best intentions don’t actually reflect the best choice — or even if an old white guy like him should be the guiding moral principle for future generations. Watching a wizened mind like Picard’s wrestle with such a challenge could make for gripping, enlightening television; television that’s actually made with multiple generations in mind. But that would require letting the past die, and the “Star Trek” franchise — like all the rest — looks none to eager to kill it.