‘No Sudden Move’ Review: Don Cheadle and Benicio Del Toro Have a Blast

Everyone is having such a blast in “No Sudden Moves” that it’s hard to realize how minimal of an impression it leaves until it’s over. Steven Soderbergh’s lighthearted crime caper offers the kind of fast-and-loose ensemble material that he spins out in his sleep, and with a robust cast on the same wavelength, “No Sudden Move” makes its sense of play infectious.

Set in Detroit circa 1954, “No Sudden Move” was shot during the pandemic and has the speedy quality of a production that doesn’t want to waste any time. It’s so fun to watch the exploits of two-bit criminals Ronald (Benicio Del Toro) and Curt (Don Cheadle) as they attempt to take control of a hired gig on their own terms that, even as the movie devolves into an ineffectual shaggy-dog story shoehorned into a baffling and abrupt real-life backdrop, it remains a slick and enjoyable pastiche about messy outlaws adrift in a world designed to screw them over.

Leave it to Soderbergh and screenwriter Ed Solomon (“Now You See Me”) to bathe in the tension between style and substance. Yes, “No Sudden Move” ultimately comes down to a profound conspiracy involving the future of the planet itself, but the eco-crisis twist that sneaks into the movie with a third-act “huh?” feels like little more than a high-class MacGuffin. It’s mostly just a gas to watch these self-serious criminals assemble for an odd job that goes very wrong as they attempt to pick up the pieces.

At first, the period backdrop feels like little more than an excuse for exuberant costume designs, as the stakes of “No Sudden Move” seem as straightforward as they come: Ronald, Curt, and feisty cohort Charley (Kieran Culkin) have been hired by the mobster Frank Capelli (Ray Liotta) to track down a mysterious document. To do so, they must infiltrate the home of the strait-laced Matt Wertz (David Harbour) and his wife Mary (Amy Seimetz). In a dizzying kitchen showdown, the masked assailants force Mary and her children (including Noah Jupe, who has a knack after “A Quiet Place” and its sequal for defiant pre-teens in danger) to stay home at gunpoint while Matt goes to his office to infiltrate a safe.

Needless to say, that whole plan doesn’t go so well. Someone dies, the document goes missing, and the characters scatter across town in search of answers. As Ronald and Curt form an uneasy alliance, they wind their way toward a confrontation with their boss that leads them close to the nature of the document they were meant to capture, and what it actually means.

In the meantime, a series of subplots assemble with varying degrees of intrigue, from Jon Hamm as an archetypical investigator attempting to sort out the scheme to Matt’s ill-fated romance with his secretary (Frankie Shaw), who may be savvier than she lets on. Frank’s own wife (“Uncut Gems” breakout Julia Fox) gets her own moment to shine as the story keeps shifting focus on overdrive. It’s a lot to take in, but never less than endearing to watch Soderbergh — who edited and served as cinematographer under pseudonyms — juggle the fragments with his usual snazzy élan. 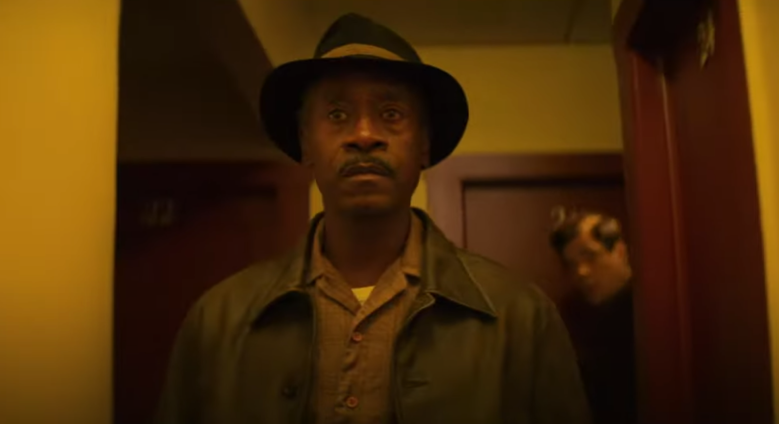 Every actor digs into that journey. Harbour shows shades of Phillip Seymour Hoffman in his blend of stern looks and frantic uncertainty, Liotta barks orders so hard it’s a wonder steam doesn’t come out of his ears, and one Soderbergh perennial who makes a surprise and substantial cameo in the third act seems keen on playing against type. Still, the central appeal of “No Sudden Move” belongs to Del Toro, with his rascally energy and scheming glare, alongside a sullen Cheadle who rolls his eyes so often at the stupid pileup of circumstances around him it’s like he’s trying to kickstart a meme.

As MacGuffin-based narratives go, “No Sudden Move” has less in common with “The Big Sleep” than “Kiss Me Deadly,” as it eventually becomes clear that the document in question has serious contents at its core. In Soderbergian terms, the closest point of comparison would be “The Informant!”, in which the playful veneer actually points to real-life circumstances and institutional dysfunction. But none of that really matters for the moment-to-moment narrative thrust of the movie, as Soderbergh jams in endless ironic asides and comical showdowns with a pitch-black comic sensibility that won’t let anyone rest easy. As every canted angle proves, danger lurks for these hustling criminals so keen on finding a big payday so they can get out. Their doomed set of circumstances beckon for Coen brothers comparisons, but Soderbergh does this particular routine on his own terms.

Solomon’s script is littered with double-crossings, desperate last-minute dealmaking, and more than one clandestine affair. “Sometimes things get sloppy,” someone says early on, and anyone trying to sort out the big picture of “No Sudden Move” will slip all over the missing pieces. Fortunately, it’s not worth the effort when Soderbergh maintains such command over the constant forward momentum, and the many endearing faces therein. By the time the great Bill Duke shows up and simply dominates the screen, it’s clear that “No Sudden Move” is one of the 2020 projects willed into existence during hard times and just happy to be here.

And then, with all of its plot threads laid to rest, the movie decides to get real with an end credit that puts the whole story in historical circumstances irrelevant to its appeal. In retrospect, “No Sudden Move” is satisfying for that exact reason: It drills into the absurdity of hustling to get results from a system so steeped in corruption that no single individual can possibly escape the machinery around them.

Some filmmakers make that point with grand metaphors and didactic overstatement. “No Sudden Move” rightly assumes its audience doesn’t go to the movies for a history lesson, and sneaks it in the backdoor. But the truth is that it doesn’t even need to be there for the movie to do its little dance and call it a day.

“No Sudden Move” premiered at the 2021 Tribeca Film Festival. It premieres on HBO Max on Thursday, July 1.