Filmmaker Toolkit Podcast Ep 105: Gerwig goes deep on adapting Alcott’s Amy and the ending, and how she gave the film a modern sense of dance.

When director Greta Gerwig introduces each of the four March sisters, at the beginning of her adaptation of Louisa May Alcott’s “Little Women,” each has already gone off in her own direction of adulthood. Even when the illness of the youngest sister Beth (Eliza Scanlen) brings them back home, the four sisters are never again reunited.

“They’re never all together again, not the four of them,” said Gerwig when she was a guest on IndieWire’s Filmmaker Toolkit podcast. “When I realized that about the book, once they are in their separate lives that’s it, I found that unbearably heartbreaking. I thought, ‘Oh, the thing you miss is already gone.’”

Gerwig plays with time in structuring her adaptation, starting with the sisters on their own in early adulthood, and then flashing back seven years to when they were living in the family home as teenagers. In essence, the story moves back and forth between the aspirations of youth and the reality of adulthood.

“[I wanted] to play with the iconography of ‘Little Women’ because if I’ve rearranged the time and we ground it in adulthood then when we do some of the warm, cozy scenes of ‘Little Women’ that everyone knows — they’re gathered around the fire and reading a letter from Pa — it’s given another layer of meaning because it’s the ache that it’s gone,” said Gerwig. “Whatever that moment was, it is also gone, which is, for me, also the position of the writer, you are always writing the thing that’s already passed.”

Subscribe via Apple Podcasts to the Filmmaker Toolkit Podcast

As IndieWire’s Kate Erbland wrote, the Amy character created by Gerwig and actress Florence Pugh is a refreshing change of pace. While on the podcast Gerwig talked about how much she identified with Amy when re-reading “Little Women” for adaptation. Specifically, the way Amy abandons her painting in Paris when she realizes that she’ll never be a great artist.

“It’s unbearable to Amy that she’s not going to be a genius and it’s something I really understand,” said Gerwig. “I think a lot of people who have artistic ambitions understand, because if you love art and you see that you’re not going to be one of the greats, I think it’s painful.”

Starting in adulthood helped create a more serious Amy, who is very much a child in the first half of the book. Gerwig also found Amy’s lines of dialogue, as written by Alcott, to be the most profound and the ones she kept underlining and returning to.

“I thought when I was reading it again, ‘Oh my God, Amy’s so much better than I’d ever given her credit for,’” said Gerwig. “It made me realize too, what an interesting diagnosis of our culture that the character who says most clearly what she wants is the one we hated for so long. She’s so clear — I want these things — and then she goes after them.” 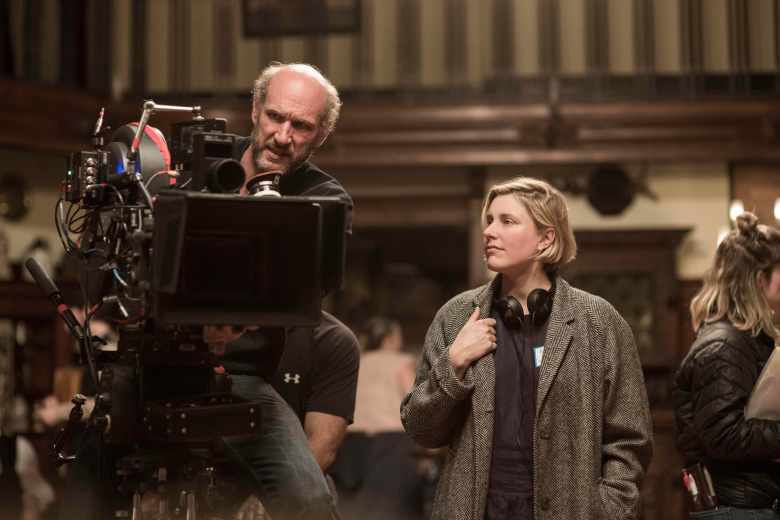 Yet for all the gravity Gerwig found in “Little Women,” the writer/director wanted her adaptation to move, to have a sense of dance and lightness in the way it was told cinematically. A key part of this was recruiting cinematographer Yorick Le Saux to shoot the film. While on the podcast, Gerwig talked about how the beauty of “I Am Love” and the movement of “Carlos” drew her to the “Little Women” DP.

“It was the movement in ‘Carlos’ he had that [was] relentless, almost like I felt some restlessness behind the camera,” said Gerwig. “I could feel him, and I liked that. I think sometimes with period pieces you run the risk of looking like everything is nailed to the ground, so I felt like if I could get that kind of lightness and that kind of irreverence of the camera movement, it would take some of that heaviness out and I think it was a big part of why people are saying it feels modern.”

While during the adulthood section of the film the camera would be more formal, static and distant, Gerwig and Le Saux relied heavily on dolly camera movement for the flashbacks so the camera had “weight on the earth, like a dancer” quality to it, rather than the more floating sensation of a steadicam. Gerwig draws a strong connection between how these camera movements, the speed of her dialogue, and the work she did with editor Nick Houy all work in unison.

“[Nick and I] looked at French New Wave movies, particularly Truffaut…because they are period pieces but they don’t feel like it and it’s hard to know why, but part of it is the cutting,” said Gerwig. “It just gives you little moments and they cut out before you’re settled. It cuts a beat before [landing]. I’m very hesitant of the land because I like keeping the ball in the air. I have a rhythm, but I need to dive right into it.”

The Filmmaker Toolkit podcast is available on Apple Podcasts, Spotify, Overcast, Stitcher, SoundCloud, and Google Play Music. The music used in this podcast is from the “Marina Abramovic: The Artist Is Present” score, courtesy of composer Nathan Halpern.