The “Schitt’s Creek” Emmy-winner seeks revenge on behalf of all cast aside sitcom wives in AMC’s curious hybrid between broad sitcom and dark drama.

“Kevin Can F Himself” is a clear-cut, incontestable, black-comic evisceration of toxic sitcoms. That much is clear within the first hour, if not the first 10 minutes. But the new show from creator Valerie Armstrong might also be something more — something harder and gnarlier that hasn’t fully revealed itself, yet is creeping around the edges of the first four episodes, waiting to assume the spotlight.

Such a familiar set-up is made even more so by the scene’s format. An unseen audience laughs at Kevin’s noxious jokes. Bright lights flood the brown, sparsely furnished room. Multiple cameras cut from a wide look at the stage to medium shots of one or two characters. It’s the same kind of broadcast sitcom about a bickering married couple you’ve seen for decades.

That is, until Allison walks out and everything goes dark. Carrying her husband’s empty beer stein in one hand and the laundry in the other, this wife isn’t left to do her chores off-screen; she’s dead center in the frame, shadows cascading over the messy house around her, the audience not just silent, but gone. Allison cringes, clearly upset from the dismissive interaction that represents her daily life, and as the stress builds in her head, she slams the stein down on the table in front of her. Only the handle remains. Her hand is bleeding. She shouts, “I’m fine” over her shoulder, but no one hears her because no one cares. She’s alone, but worse than that, she’s trapped.

For the rest of the show, “Kevin Can F Himself” pivots between these two outlooks. The half of the show without Kevin is a gritty drama. The half featuring Kevin is a “cheery” sitcom, a la “Kevin Can Wait” — the defunct 2016-2018 Kevin James comedy that infamously killed off his character’s wife, played by Erinn Hayes, so it could bring in Leah Remini, who starred as James’ spouse in their previous CBS hit, “The King of Queens.” While one of the more glaring recent examples of the genre’s maltreatment of female characters, “Kevin Can Wait” is far from the only half-hour series to treat wives as disposable props, and “Kevin Can F Himself” goes after them all.

For anyone still entertained by men who can’t stop lamenting marriages they’re barely participating in, “Kevin Can F Himself” should lodge itself permanently in their brain, making them think twice about each misogynistic “joke.” But Armstrong’s hourlong hybrid might have its sights set on a bit more than bad sitcoms; its parody might also extend to those too-dark crime dramas, as well.

Without delving into plots too far past the pilot, “Kevin Can F Himself” finds its tension in its shadowy “reality.” It’s there that Allison starts to bond with Patty (played with endearing stoicism and nihilistic wit by Inboden); it’s there that she starts to realize how awful her husband has become (or always was?); and it’s there that she starts to plot his murder — yes, his murder. By making this goal Allison’s ongoing ambition, the series invites questions not just about the truth behind its “comedy,” but how we see its drama, as well.

Are the non-sitcom scenes actually “reality,” or do they represent another genre in need of skewering: like, say, the prestige crime drama? After all, those scenes are awfully dark — which could double as contrast to the glaring multi-cam lighting and commentary on the literal darkness overtaking TV’s oh-so-serious antiheroes. Plus, Allison’s demeanor isn’t just angry, frightened, or a combination of the two; she’s a hop, skip, and a jump from unhinged, and the lengths she’s willing to go in order to dispose of her controlling partner aren’t far off from Marty Byrde’s or Walter White’s. 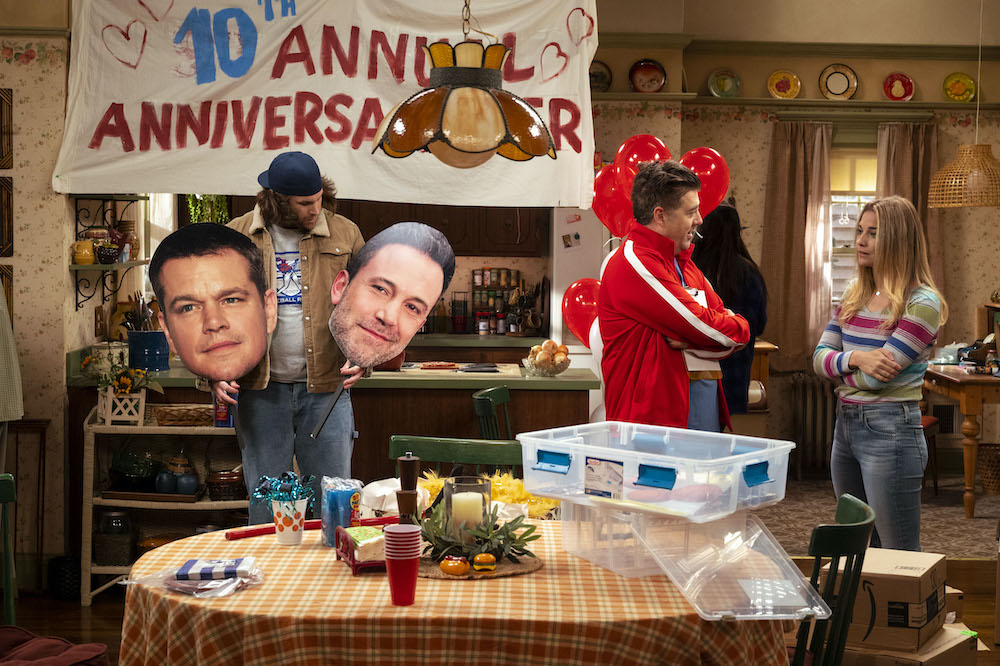 “Kevin Can F*** Himself” is set in Worcester, MA

It’s hard to say if that’s the real mission tucked within the shady half of “Kevin Can F Himself” (and if it could work long-term), though if Allison’s kill quest is meant to be taken as reality — even a reality twisted by 10 years of emotional abuse — it’s obvious there’s not much gas left in the tank. Post-pilot episodes can drag, even at 45 minutes, and the time fillers get more and more obvious. Kevin’s sitcom is frighteningly sharp (you may even laugh in spite of yourself), but his random antics (prepping a chili cook-off or going to war with the new neighbors) don’t justify their time. Not when watching Murphy bounce between perfect sitcom patter and twinkle-in-the-eye drama is such a treat, especially as she’s paired with Inboden in later episodes. After all, “Kevin Can F Himself” isn’t really about Kevin; it’s about Allison, and in turn, recognizing individual women as fully realized people, capable not only of carrying their own story but telling it.

As the show goes on, Kevin’s sitcom feels more and more like a nefarious intrusion, and Allison’s drama more and more like a suspenseful escape. Together, the show might become not just one pointed parody but two; a take-down of toxic sitcoms and a spin on prestige, male-driven crime dramas. Maybe Allison can even become a straight-up hero, rather than the antiheroes we’re so used to seeing. Misogyny isn’t just an accepted part of TV shows; it’s too often an accepted part of society. Why not let her go full John Brown, and scorch the earth if it means bringing those outdated American notions to an end (and further challenging our acceptance of bad men)?

“Kevin Can F Himself” is one of those shows where it’s impossible to tell how good it’ll be by season’s end, let alone after a few seasons. Less time needs to be spent in Kevin’s stake-less sitcom world (or more time, if there’s actually something to be learned about the titular buffoon), but that adjustment could be made over the coming hours or not at all; Allison needs to pivot away from her murder plot, or get on with it already — either sending the show’s dark drama into more realistic territory (she gets a divorce or separation) or pushing its “Breaking Bad”/”Ozark” crime parody to extreme, consistently entertaining ends. (What if Allison really does kill Kevin, and Season 2 sees her on the run with Patty? What fun!) These examples aren’t suggestions so much as “what if’s?” “Kevin Can F Himself” has already earned our attention. Now we wait to see what the show has to say beyond its explicit, primary message.

“Kevin Can F*** Himself” premieres Sunday, June 20 at 9 p.m. ET on AMC with two episodes. New episodes will be released a week early on AMC+.