Before “country music outlaw” became just another outfit for would-be badasses to try on, Johnny Cash made it a job description. But among the seven arrests he accrued during his most tumultuous years, from the late 1950s to 1967, none was quite like the time he was arrested in Starkville, Mississippi while picking flowers on May 11th, 1965.

The way the Man in Black told the story of his mishap in the song “Starkville City Jail,” from his 1969 live album Johnny Cash at San Quentin, he was innocently picking dandelions and daisies when the sheriff pulled up and carted him to jail, where he spent the rest of the night and paid a $36 fine. Of course, like many stories, he left out a couple of details — like the public drunkenness and indecent exposure charges they stuck to him in addition to trespassing onto private property to pick those flowers.

On Friday, the Mississippi Country Music Trail commemorated Cash’s night in the Oktibbeha County Jail — which is incidentally still a dry county, although he could legally have a drink today inside city limits — with a historical marker in Starkville. Longtime Cash sideman and friend Marty Stuart performed “Starkville City Jail” on a Martin D-45 guitar Cash frequently played during the San Quentin era. Cash’s marker joins 34 others to date, celebrating artists like Jimmie Rodgers, Charley Pride, Conway Twitty, Faith Hill, Tammy Wynette and Stuart himself.

While the “Starkville City Jail” incident was soon overshadowed by his October 1965 bust in El Paso, Texas for bringing more than 1,000 speed and sedative pills across the border from Mexico, its legend grew in the years that followed. Stuart, who grew up an hour south of Starkville in Philadelphia, Mississippi, once asked his former boss and father-in-law (he was married to Cindy Cash from 1983 to 1988) what really happened.

“He said, ‘Well, what I remember about the night’ — and I still to this day can’t imagine Johnny Cash playing a frat party, which is what the circumstances were — ‘I put on a decent show, but I put on a really good show after the concert was over.’” 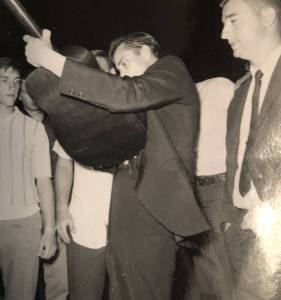 Johnny and June Carter Cash did play an impromptu set at the Pi Kappa Alpha fraternity house after a concert at Mississippi State University, but it apparently happened a year earlier, says John Arledge, who booked Cash to play at the Lee Hall Auditorium on campus the night of May 6, 1964. Arledge paid $1,950 for Cash’s performance and sold out the 1,000-seat venue in two hours at two bucks a head. Although Cash was contracted to play for 90 minutes, he told the audience he was having fun and played another hour and a half.

After the show, Arledge went backstage and Cash asked him, “Now, where can I get a drink in this town?” Arledge said to follow him. “I took him down to the Pike house and he started talkin’ and meetin’ folks, and told his band, ‘Y’all go out to the trailer and get our instruments and bring ’em in.’ And so they did, and he and the band played for about 45 minutes while they were drinking and having a good time.”

Mike Streiff, one of Arledge’s fraternity brothers, remembers the house staff cooked fried chicken for the band, and Johnny and June sang a rendition of the gospel song “Were You There When They Crucified My Lord?” while sitting on the kitchen floor. Afterward, Arledge made sure the band and their van and trailer got back to their motel safely.

The following year, the university invited him back for an encore performance, this time at a larger space on campus. That night also ended memorably, but for all the wrong reasons.

Cash didn’t appreciate the sheriff interrupting his flower pickin’, which he made clear by repeatedly shouting and kicking his cell door so hard he broke a toe. On his way out the next morning, he gave his shoes to his 15-year-old cellmate, who deputies also nabbed on a public drunk charge, saying, “Here’s a souvenir. I’m Johnny Cash.”

Cash’s anger didn’t last much longer than a hangover, though. “He invited the policeman who arrested him to one of his shows later on,” Stuart says. “It was all in good-natured fun and a grateful way, an easy way, to say, ‘Thank you for saving my life maybe that night.’”

“Probably the best chamber of commerce [ambassador] the city of Starkville’s ever had,” Stuart adds, “is Johnny Cash.”