Human, All Too Human: A Book For Free Spirits by Friedrich Nietzsche 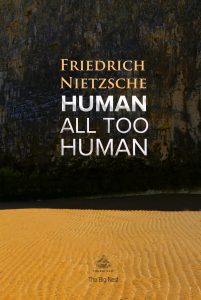 Human, All Too Human: A Book For Free Spirits is Nietzsche’s first in the aphoristic style that would come to dominate his writings, discussing a variety of concepts in short paragraphs or sayings. Reflecting an admiration of Voltaire as a free thinker, but also a break in his friendship with composer Richard Wagner two years earlier.