Eat Pray Love: One Woman’s Search for Everything Across Italy, India and Indonesia by Elizabeth Gilbert 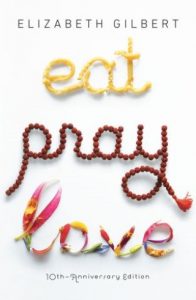 In her early thirties, Elizabeth Gilbert had everything a modern American woman was supposed to want—husband, country home, successful career—but instead of feeling happy and fulfilled, she was consumed by panic and confusion. This wise and rapturous book is the story of how she left behind all these outward marks of success, and set out to explore three different aspects of her nature, against the backdrop of three different cultures: pleasure in Italy, devotion in India, and on the Indonesian island of Bali, a balance between worldly enjoyment and divine transcendence.

Get this book from Amazon: https://amzn.to/33O7qfh

Elizabeth Gilbert is an award-winning writer of both fiction and non-fiction. She is best known for her memoir Eat, Pray, Love, which was published in over thirty languages and sold nearly ten million copies worldwide. The film, released in 2010, stars Julia Roberts and Javier Bardem. Elizabeth Gilbert lives in New Jersey, USA.