Beyoncé has penned an open letter to the Attorney General of Kentucky to seek justice for Breonna Taylor, a 26-year-old EMT in Louisville who was killed in an unannounced police raid on her boyfriend’s apartment. The police officers involved in the shooting have not been charged in Taylor’s death.

“It has now been over three months since members of the Louisville Metro Police Department (LMPD) killed Breonna Taylor. Plainclothes officers with a ‘no-knock’ warrant forced their way into her apartment, where she was asleep and unarmed. Moments later, the officers fired over twenty shots into Breonna Taylor’s home, striking her at least eight times,” Beyonce wrote to Kentucky AG Daniel Cameron.

“Three months have passed — and the LMPD’s investigations have created more questions than answers. Their incident report states that Ms. Taylor suffered no injuries —yet we know she was shot at least eight times. The LMPD officers claim they announced themselves before forcing their way into Ms. Taylor’s apartment — but her boyfriend who was with her, as well as several neighbors, all say that this is untrue.”

On Friday, the Louisville police department voted unanimously to ban no-knock warrants, calling the new legislation “Breonna’s Law.” However, Beyoncé wrote, “While ‘Breonna’s Law passed in Louisville and federal legislation has been introduced that will also ban no-knock warrants, these small steps in the right direction are painful reminders that there has still been no justice for Breonna Taylor or her family. “

In the letter, Beyoncé calls on Cameron to criminally charge Jonathan Mattingly, Myles Cosgrove, and Brett Hankison — the three officers involved in the fatal shooting — as well as investigate the LMPD’s response to Taylor’s death. Beyoncé also asked for Cameron to “commit to transparency in the investigation and prosecution of these officers’ criminal conduct.”

“Your office has both the power and the responsibility to bring justice to Breonna Taylor, and demonstrate the value of a Black woman’s life,” the singer added.

“Don’t let this case fall into the pattern of no action after a terrible tragedy. With every death of a Black person at the hands of the police, there are two real tragedies: the death itself, and the inaction and delays that follow it. This is your chance to end that pattern. Take swift and decisive action in charging the officers. The next months cannot look like the last three.”

In late May, Beyoncé turned to social media to seek justice for George Floyd.

Read Beyoncé’s letter in full below: 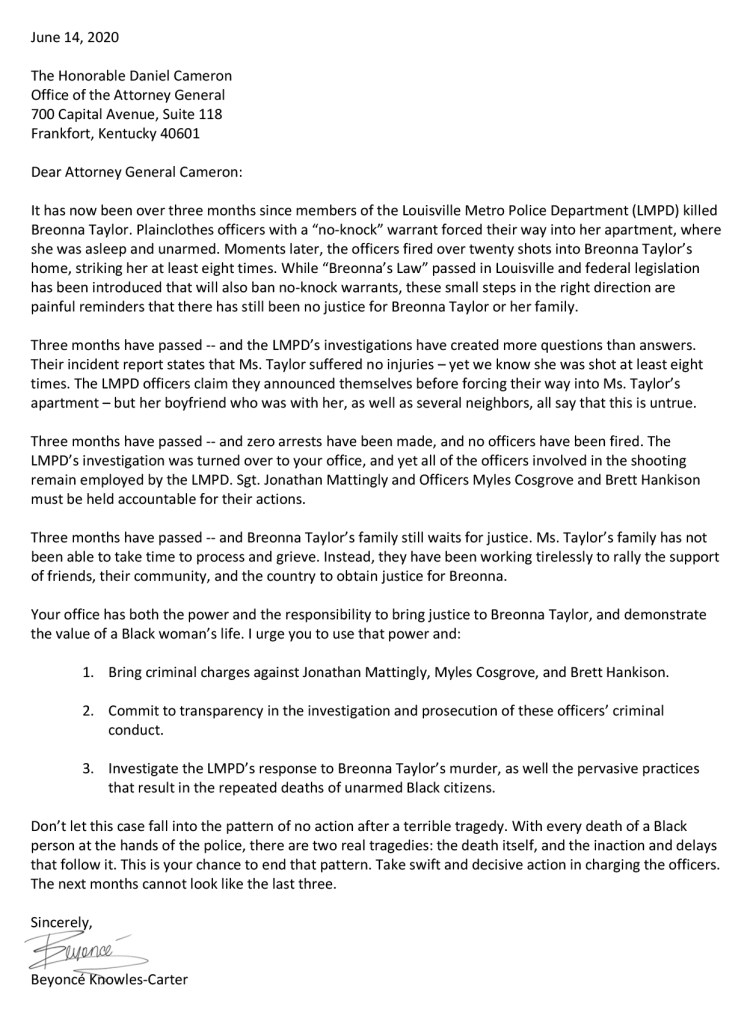