From a Death Star waffle maker to Adidas’ Skywalker-themed Stan Smiths, check out these gifts for the “Star Wars” fan in your life. (It’s okay if that fan is you.)

Products featured are independently selected by our editorial team and we may earn a commission from purchases made from our links.

It’ll be a while before another “Star Wars” movie hits the big screen, but that doesn’t mean you can’t indulge in your fandom of that galaxy far, far away. For starters, you could sign up for Disney+ so you can have access to every film in the franchise, plus its animated spinoff series “Star Wars: The Clone Wars,” plus the critically acclaimed live-action series “The Mandalorian.”

But second, you could check out this list of “Star Wars”-themed gifts perfect for the special “Star Wars” fan in your life — or just you. You deserve gifts too!

The first level of fandom is always a novelty mug. Everyone loves a novelty mug; that is just science. This particular novelty mug features lightsabers that change color when you fill it with hot liquid. (For the curious nerds, the thermochromatic lightsabers belong to Yoda, Darth Vader, Luke Skywalker, Obi-Wan Kenobi, and more.)
$15.95 at Amazon.

The next step up from novelty mugs: novelty KNIVES. This set of four cheese knives (a cheese plane, knife/spreader, curved knife with dual prong tip, and sharp knife for hard cheeses) by Picnic Time comes nestled inside a wooden Death Star-themed cutting board.
$38.21 at Amazon.

Looking for a slightly less, uh, hardcore way to profess your “Star Wars” love in the kitchen? This set of four nonstick silicone pancake molds from Williams-Sonoma are shaped like Yoda, a Stormtrooper, Darth Vader, and R2-D2. They are heat-resistant up to 500 degrees Fahrenheit, and will not fade or discolor with time.
$32.85 at Amazon.

Pancakes aren’t your thing? Maybe you’re a waffle kind of person. This Death Star waffle maker will produce perfectly cooked waffles (you can adjust a dial to indicate whether you’re interested in light and fluffy or darker and crispier waffles) in the shape of the infamous orb of fascism.
$39.99 at Amazon.

You thought we were headed out of the kitchen? Think again, because this “Star Wars” slow cooker features rad graphics of the Millennium Falcon, TIE fighters, and more. The marketing copy for this slow cooker also notes that it’s a perfect size for two to three servings for your “closest galactic allies,” and it’s “a slow cooker simply worthy of the galaxy’s finest — YOU!” You know what? They’re right.
$19.99 at Amazon.

Okay, fine, this is the last kitchen item: a Darth Vader apron, because you don’t want to let that recipe get the best of you. You are as powerful as Darth Vader in the kitchen. You can do this.
$14.95 at Amazon.

The 2020 Adidas x Star Wars collaboration includes a pair of Luke Skywalker-themed canvas Stan Smiths (the “nooooo!!!” on the soles is a particularly fun touch), available on the Adidas site. You can also find two more of this year’s launches, a pair of Ultra Boost Yoda running shoes and Death Star Alphaedge cross-trainers, on the Adidas site, or peruse past editions (like the pictured Millennium Falcon Ultra Boosts or some Stormtrooper joggers) on Amazon. There are kids’ versions too.
$120-$180, Adidas and Amazon.

If LEGO isn’t your thing but you’re still looking for something to build, this massive 1,000-piece jigsaw puzzle featuring bounty hunter Boba Fett is appropriate for people ranging in age from 168 months to 1,200 months. (Is that a space thing? In Earth time that’s 14 years to 100 years.)
$14.41 at Amazon.

For a more subtle way to display your “Star Wars” fandom, this recreation of Han Solo’s famous dice features an antique, weathered look and is made from solid cast metal and plated with gold. They’re versatile: Hang them over your rearview mirror, or just sit them on your desk to stare at when you get writer’s block.
$19.99 at Amazon.

Let your pals Chewbacca, Luke Skywalker, Obi-Wan Kenobi, and Han Solo keep your car cool for you with this spring windshield sun shade. Hot tip from user Jory K: “My windshield is a bit small (Jeep Patriot), so Luke gets cut out of the picture as Obi-Wan overlaps him, that’s fine by me. Of course if you have a similar vehicle, you could overlap Luke first and cut Obi-Wan like the first Death Star escape.”
$13 at Amazon.

This one’s pretty self-explanatory — the three roundest “Star Wars” icons (R2-D2, the Death Star, and BB-8) are perfectly suited for printing on golf balls.
$14.95 at Amazon.

This small, two-inch Millennium Falcon keychain is also a bottle opener. It was allegedly made in a galaxy far, far away, but the Prime shipping is free so we have our doubts it really was that far away.
$3.95 at Amazon.

A popular accompaniment to the novelty mug is the novelty sock, and this is a set of four of them featuring Darth Vader, a Stormtrooper, Chewbacca, and R2-D2. The one-size-fits-all socks have a lifetime warranty, but it’s unclear what that means for a novelty sock.
$12.95 at Amazon. 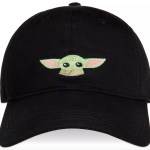 The Child Baseball Cap for Adults

Disney copywriters, take it away: “Bonnet your bean with this traditional baseball cap featuring an embroidered appliqué of the Child from ‘Star Wars: The Mandalorian.’ You just might have heard of him…”
$24.99 at DisneyStore. 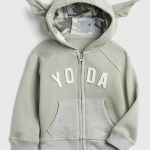 This is technically listed under boys’ clothes, but this adorable babyGap Yoda hoodie is too cute to pass up for any child.
$34 at Gap.

Little girls love “Star Wars” too, and this Amazon brand has created a set of four “Star Wars”-themed leggings featuring favorite characters and other “Star Wars” visuals.
$16-$30 at Amazon.

Previous post
Sia, Anderson East Contribute to ‘At Home With the Kids’ Album
Next post
House Dems, led by Tlaib, call for Trump to let Lebanese nationals stay in US after Beirut blast