The Best of Leo Tolstoy

Leo Tolstoy is without a doubt a genius of world literature.  His epic novels have been among the top 10 books of all time for hundreds of years and remain an inspiration and treasure chest of wisdom and history today.  Some of Lostoy’s best known and best loved novels include his epic War and Peace, the dramatic romance Anna Karenina and intriguing philosophical story The Kreutzer Sonata.

War and Peace, one of the most important works of world literature. It is considered Tolstoy’s finest literary achievement, along with his other major prose work Anna Karenina. Tolstoy himself, described War and Peace that it was ‘not a novel, even less is it a poem, and still less a historical chronicle.’ Large sections of the work, especially in the later chapters, are philosophical discussion. He went on to elaborate that the best Russian literature does not conform to standard norms. 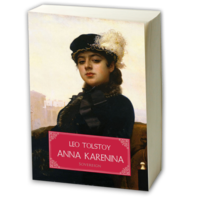 Anna Karenina, one of the greatest novels written by Leo Tolstoy, often credited as the pinnacle of realist fiction, and described by Tolstoy himself as his first true novel.

The Kreutzer Sonata, one of the most controversial novels written by Leo Tolstoy. It was named after Beethoven’s Kreutzer Sonata and attracted immediate attention of censors on both sides of the Atlantic when it first appeared. The narrative follows the main character, Pozdnyshev who relates the events leading up to his killing his wife.