‘You Should Have Left’ Review: Kevin Bacon in Creepy Haunted House

David Koepp’s adaptation of Daniel Kehlmann’s wicked novella is as much about a fraying mind as it is a nefarious Welsh mansion.

There’s something wrong with Theo Conroy. A meditation app can’t quiet his mind, which is prone to jealous fantasies and out-there suspicions. Small annoyances rattle him. People look at him askance, his name jarring loose uncomfortable memories, even for seeming strangers. His wife’s success pisses him off. Even his kid knows that something is not quite right with her “Baba.” A vacation can’t solve everything, but it certainly can’t hurt. Or can it? Stepping back from the blockbusters on which he’s built his career — for better and worse — “Jurassic Park” writer and “Mortdecai” director David Koepp turns his attention to the small-scale chills of “You Should Have Left,” a creepy twist on the haunted-house thriller that’s as much about a fraying mind as it is a nefarious Welsh mansion.

The chiller reunites Koepp with his “Stir of Echoes” star Kevin Bacon (who also produced the film), hinting at the pair’s apparent affection for horror offerings with natty psychological twists. In search of a little peace of mind, Theo (Bacon), his much younger wife Susanna (Amanda Seyfried), and their sweet daughter Ella (a well-cast Avery Tiiu Essex) decamp for a tricked-out AirBnB in the middle of nowhere. But if there’s something wrong with Theo before the Conroys enter the cold Welsh abode, it’s only going to get much worse, as his mental state continues crumbles inside a house that appears to have been designed to drive him totally nuts.

Based on Daniel Kehlmann’s popular 2017 novella of the same name, Koepp (who also adapted the script) has taken a few liberties with the original vision, some seemingly small (i.e., Bacon’s character is no longer a struggling screenwriter, but a wealthy banker) and others are far too large to mention without verging into spoiler territory. But the soul of Kehlmann’s creepy little work remains in place: Theo is already at loose ends, and the house is hellbent on exploiting that into horrifying new shapes. (Kehlmann’s novel also built in an ambitious backstory for the house itself, which is limply mentioned in the film and then dropped; rest assured, however, this house is bad news.)

Designed to be disorienting from the start, Koepp opens “You Should Have Left” with an unnerving sequence that plays up his apparent interest in looming shadows, off-kilter framing, and dreams within dreams (within dreams?). By the time the Conroys arrive in Wales, both Theo and Koepp’s audience are primed for some big chills, but Koepp takes his time with the madness, instead opting to steadily introduce the house as its own character. (Yes, yes, it’s a trope, but in this case, it’s a good one.) 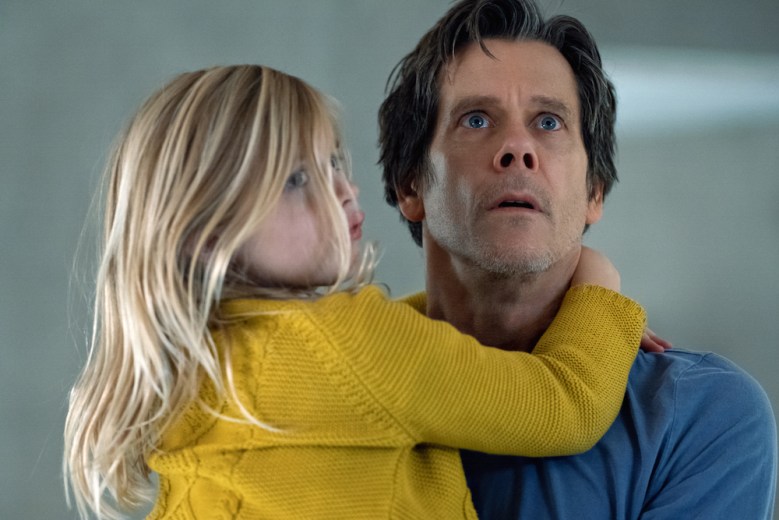 “You Should Have Left”

“Seems bigger on the inside…way bigger,” Theo muses upon entry, and how very right he is. Bolstered by stellar production design from Sophie Becker and Megan Elizabeth Bell, and uneasy lensing from cinematographer Angus Hudson, it’s clear that something is amiss. The house’s layout isn’t just counterintuitive, it’s somehow wrong: too many light switches, too many doors, too many hallways. Angles don’t match, measurements don’t line up, and was that other door always there? Or that hallway? Where did that light come from? And why does food rot so quickly?

As Theo’s mind continues to spin out — not all of his seeming fantasies are actually incorrect — the walls metaphorically and figuratively close in. Both Seyfried and Essex do solid work (and the younger actor turns in the kind of wonderfully unfussy performance that is often in short supply), but “You Should Have Left” mainly serves as a showcase for Bacon to move through various states of dread and horror. Fortunately, he does that with ease, and his performance elevates material that can teeter between pared down and underbaked, especially as it works up to a final act that’s both nerve-shredding and oddly thin.

For most of its running time, “You Should Have Left” trusts its audience to pick up what it’s putting down, as Theo plunges into an existential nightmare that centers on the icky architecture of the house (and of his own mind). A handful of odd interactions with others add a bit of color, though it’s left mostly to Bacon to pull together the film’s more ambitious threads. Eventually, the film collapses into less inspired tropes (creepy-dead-lady-in-a-bathtub!) and a thin explanation for all the madness that doesn’t quite jibe with everything clever that came before.

But when “You Should Have Left” is at its best, it’s unconcerned with mapping out such easy clarifications and leans into the raw madness of corrosive guilt and a house made to punish people who dare come inside its walls. Bacon holds it steady, setting up residence in an uneasy, unwell character, unconcerned with making him likable or worth rooting for — the kind of person who gets left behind, and with good reason.

Universal Pictures will release “You Should Have Left” on VOD on Thursday, June 18.