The Chris Columbus classic defies any attempt at a remake, though one is planned, because it’s such a Yuletide oddity.

Click to the “Holiday Collection” on Disney+ and the first image you’ll see, because there’s no image that evokes Christmas more, is nine-year-old Macaulay Culkin, hands pressed to his face after daring to use his father’s aftershave. It’s director Chris Columbus’s Yuletide version of Edvard Munch’s “Scream” and, at this point, almost as iconic. Somehow Culkin’s grimace can stand alongside Nativity scenes and Christmas trees to evoke the season.

Disney+ has a whole lineup of cheery movies in that “Holiday Collection.” One new addition, a three-minute short about a Filipina grandma and her granddaughter bonding over a cherished toy called “From Our Family to Yours” is a tear-inducing treat. But “Home Alone,” acquired through Disney’s purchase of 20th Century Fox in 2019, feels like the crown jewel in this collection. Clips from the movie now feature prominently in commercials for the streaming service. And the movie is getting a whole surge of renewed attention for celebrating its 30th anniversary. Plus, a remake starring Archie Yates, the cherubic, bespectacled friend of the title character in “JoJo Rabbit” is in the works.

This remake must not happen. The idea alone causes this writer to wince as if he’s stepped on a nail barefoot, or had his scalp burned off, or been branded with the initials of a wealthy family from their vanity doorknob. And this is coming from someone who would gladly pay good money for a Trump-free re-edit of “Home Alone 2: Lost in New York.” But no, this reboot is like rebranding the Wet Bandits the “Sticky Bandits,” a terrible idea. “Home Alone” is a product of a time and a certain set of creatives and should be left alone unless at least some of those creatives can return. And frankly, there’s no reason for them not to.

This column will not attempt to elaborate on the greatness of “Home Alone” (I’ve already done that just recently on a 103-minute episode — as long as the movie itself — of the “30 Years Later” podcast). That greatness is self-evident. Instead, let us point out these five reasons the remake is as terrible an idea as sticking your head through a doggie-door after your partner in crime has already been shot with a BB-gun by someone on the other side. 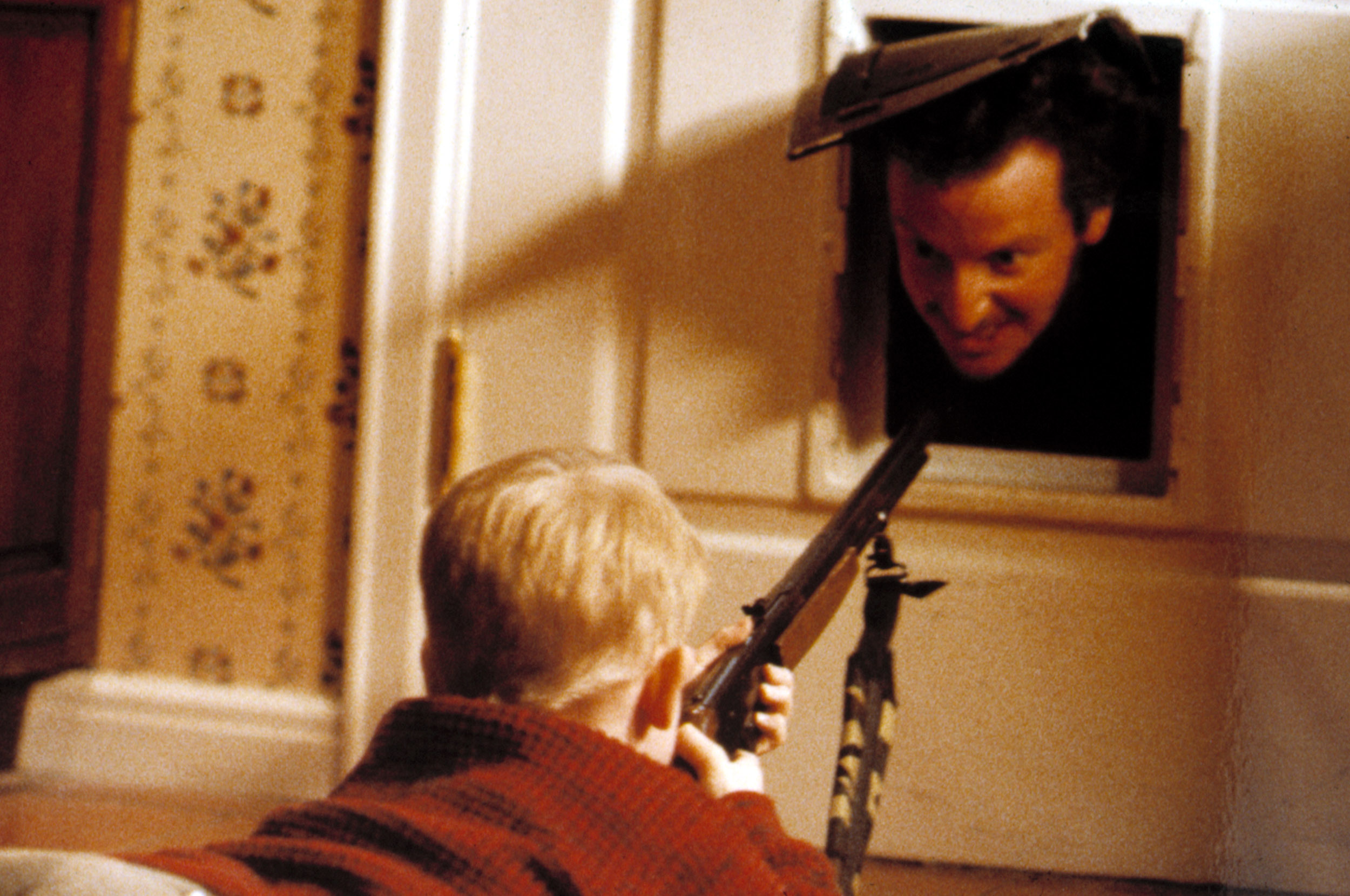 1. Because the original “Home Alone” is John Hughes by way of “SCTV”

And that’s an alchemy impossible to replicate two decades into the 21st Century. Hughes, who wrote the script after he had already made all of his teen landmarks of the 1980s, adjusted his focus from adolescents to a younger tyke in Culkin’s Kevin McAllister. Apparently, the idea came to Hughes, when, a relatively new father himself, he imagined how his own child would fare on their own if he suddenly left on a trip.

The real spice to the script, though, seems to have been found on-set. For many viewers, it was “Home Alone” through which they were first introduced to Catherine O’Hara’s unique style of comedic obtuseness. The way she goes from harriedly unconcerned indifference to harriedly obsessive concern is something only O’Hara could do. And her scenes with John Candy, who apparently, as a condition of working for only one day and not receiving payment, improvised all of his dialogue, have all of the charge of an “SCTV” sketch. That’s probably because both O’Hara and Candy were “SCTV” alums.

2. Because it’s a much harder story to tell in the age of cell phones

“Home Alone” only seems possible because it was made right at the last moment before the introduction of cell phones and the internet made Kevin’s level of isolation in one’s own home and neighborhood impossible. Tech started to intrude a bit more even in “Lost in New York” when Kevin’s parents are able to track his movements by his use of his father’s credit cards. Being cut off from the world seems much more difficult in when a downed phone line doesn’t mean a total communications blackout.

Before the production proper even started in the village of Winnetka, north of Chicago, in the early months of 1990, Chris Columbus had already filmed shots to convey a fake movie within the movie: “Angels with Filthy Souls,” a play on the 1939 Warner Bros. gangster classic “Angels with Dirty Faces.” Many kids who grew up watching “Home Alone” thought for years “Angels with Filthy Souls” was a real movie, including Seth Rogen and Chris Evans. That’s also a testament to just how well that fake movie is cast, acted, and shot, to make you think this is the real deal from the 1930s.

All of “Home Alone” shows that level of care, though. Take a look at how many of the shots are centered on Kevin so the camera is at his level, with his point of view shots also taken from a relatively low angle to reflect his perspective. It’s one of the most effective kids’-eye-view movies ever. 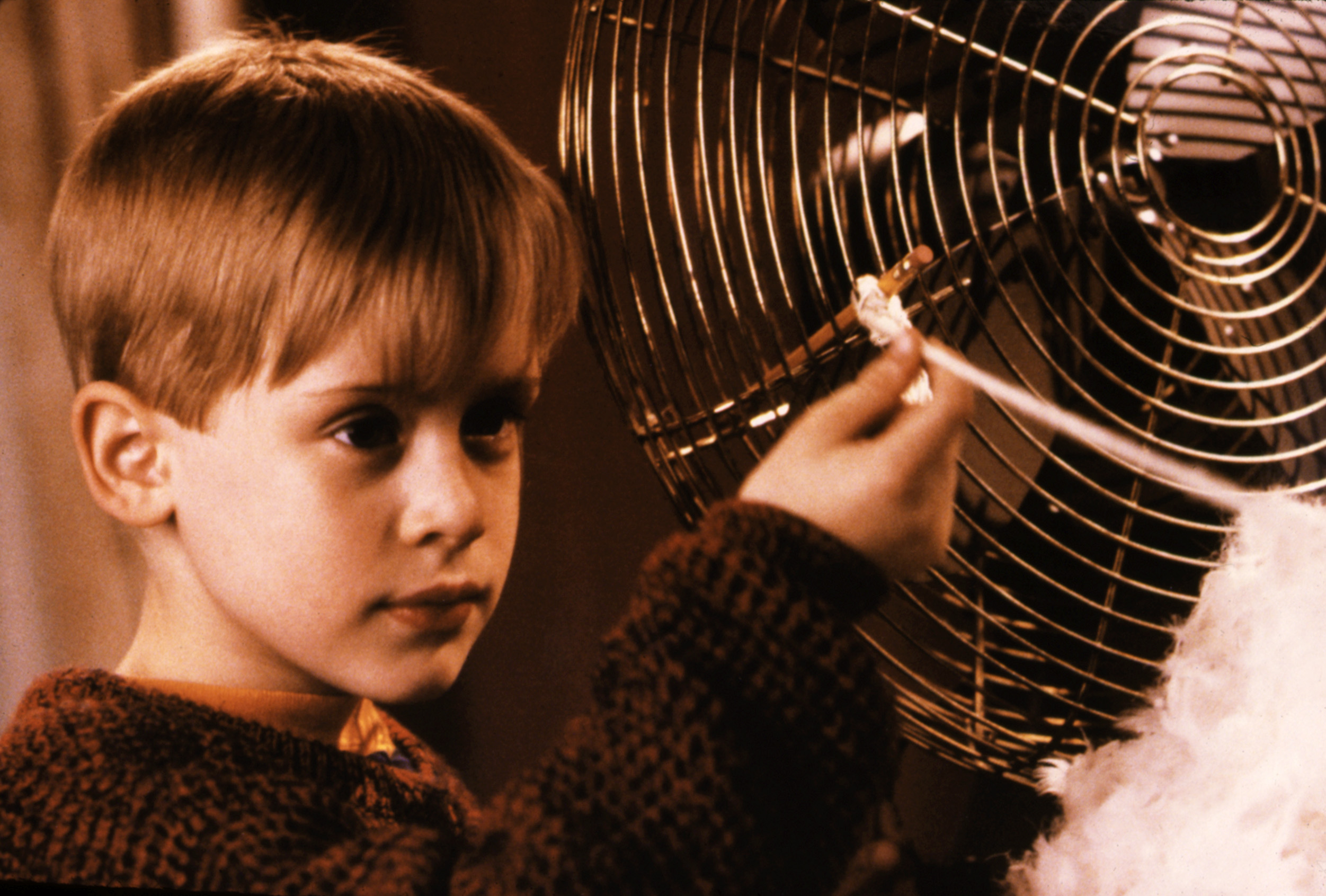 Quentin Tarantino and Mel Gibson wish they could unleash in their movies the cathartic, bone-crunching carnage Columbus puts on display in “Home Alone’s” punishing final act.

4. Because it’s a character study more than a franchise

Let’s back up a minute. This is a movie about a kid who, when he can do anything he wants with his parents away, decides to pop in a VHS tape of a 1930s gangster movie. Now that’s a character we want to know! And one very hard to duplicate.

5. Because there’s only one way a reboot could work: If it was a continuation

Pitch time. Don’t remake “Home Alone,” make a 30-years-later follow-up. Kevin McCallister is now a 40-something racked with commitment and abandonment issues who runs afoul of a paroled Marv (Daniel Stern solo, as, let’s face it, Pesci’s not coming back), which triggers his warrior instincts. Culkin, who always seems on the verge of some big, weird, almost-certainly-indie comeback project, would be back. Catherine O’Hara has never been hotter after “Schitt’s Creek,” so who wouldn’t want to see her in this movie? Devin Ratray (snotty older brother Buzz) has been on an indie-movie tear with “Nebraska,” “Blue Ruin,” and “Hustlers,” so he should come back too. Columbus should be behind the camera. Of course, Hughes died in 2009, as did John Heard, who played Kevin’s father, in 2017. But nothing would pop more than seeing most of the original cast return for a meta take on the original film. An evolution, not a reboot. As every one of us who’s lived through 2020 knows, the idea of being “home alone” has never had greater currency.

The original film was meant to be a Christmas parable, a la “It’s a Wonderful Life,” about discovering the value of what you have as opposed to the pipe-dream wish you think you want. No, you don’t really want your family to suddenly vanish after all. But in our world of hyper-connectivity, the idea of suddenly unplugging from it all for a bit is less a “be careful what you wish for” fantasy than ever before. It’s now just a fantasy. “Home Alone” is a story with great plasticity. It’s easy enough to find a “social distancing” metaphor here, or an articulation of your desire not to spend your holidays with your Trump-supporting relatives. Read just a little into it and you’ll find something that speaks to you. Remaking this story from scratch rather than continuing the story 30 years later would be an even bigger mistake than forgetting to take your child on a trip two years in a row.

Just watching the original feels like an act of the movie being made anew each time you hit the play button. That’s what timeless classics do.

Click to the next page for the archive of new releases to Disney+ from previous months.

Continue Reading:
‘Home Alone’ Itself Shows Why a Disney+ Reboot Is a Bad Idea