The interrelationships between animals and people are tightly wound, and they’re on full display in the Discovery documentary series “Serengeti.” The series, directed by John Downer, tells the story of a group of different animals living in the astonishing African region, and how they not only navigate their need to survive but manage raising children and finding love. Narrated by Academy Award-winner Lupita Nyong’o, “Serengeti” sets out to tell a different kind of nature documentary in nearly every way, from the animals at the focus of the series — to how the story is told.

Downer has been filming animals for 35 years and the Serengeti gave him the opportunity to put his camera on a wide cross-section of life. “There’s nowhere else on Earth where you get such a concentration of incredible animals,” from baboons — animals that, Downer jokes, are aware of how unpopular they are — to cheetahs and lions. When Simon Fuller pitched the project to Downer, the goal was to make it dramatic, giving narrative life to what these animals were experiencing.

For Nyong’o, who narrates the U.S. version of “Serengeti,” it presented her with a new way of looking at an area she knew only a bit better than most. Having grown up in Kenya and gone on safari, Nyong’o had never actually visited the Serengeti. “[I] consider it part of my national heritage and I love the idea of being the voice through which the stories are told,” she said.

But, more importantly, Downer was happy to not have his narrators fall into cliche. The world of the nature documentary narrator is one that remains heavily white and/or male. “The last thing I wanted was the standard white male voice,” says Downer. “I hate anything that has become a cliche, and in this world [that’s] the last thing that you want.” He was fortunate to get not only Nyong’o, but “Star Wars” actor John Boyega to provide the narration for the U.K. version of the documentary. The fact that the two actors were already friends helped as well. “They really contributed to the whole style…[they] really complemented each other.”

This being awards season, it is key to note that only two black women ever have been nominated for narration at the Emmys: Whoopi Goldberg and Angela Bassett. “The very fact that you can give that statistic is proof positive that there’s still work to be done,” Nyong’o said. The Oscar winner says she’s certainly proud to be involved with the documentary and that “I took it on because, in and of itself, it was an interesting project.” And she’s aware that having her voice included helps open the door for future people of color to enter the narrating landscape and, hopefully, balance the numbers. The industry seems to be on the cusp of making some changes with an eye on diversity; another high-profile nature documentary this year, Disneynature’s “Elephant,” was narrated by Meghan, Duchess of Sussex. 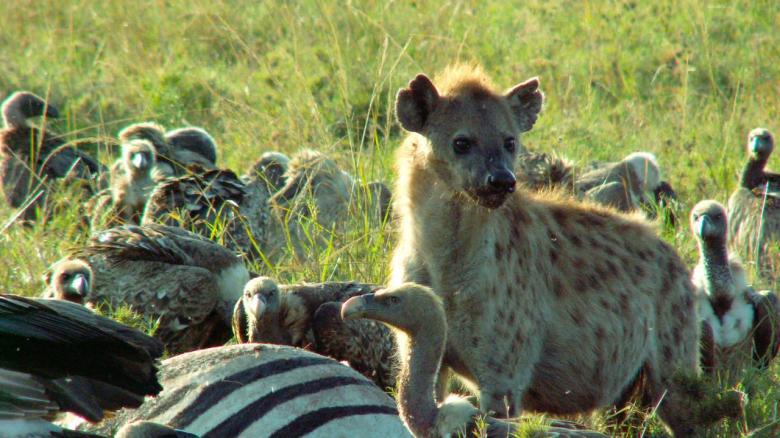 More than anything, Downer and Nyong’o want the documentary to connect with audiences, particularly in light of the fact that many of these animals have never been filmed in this way. Downer makes a point that certain animals, the aforementioned baboons for example, are often ignored in documentaries and animal parks because they aren’t as thrilling as lions and other vicious predators. “You can go into this animal that no on really knows…but they get under your skin. You understand the complexities of their behavior,” he said.

Downer says that in most animal parks baboons like the ones depicted in “Serengeti” will find it odd for humans to stop and look at them. “They are so worth looking at because their behavior is so complex,” he said. In fact, both Nyong’o and Downer say their favorite storyline within “Serengeti” involves a baboon named Bakari, who ends up taking on an orphaned baby and raising it as a single dad, so to speak. “I’ve never even imagined that,” said Nyong’o. “You see his sensitivity. He is trying to make it without the need to dominate.”

And as the world finds itself trapped in quarantine, the animal kingdom takes on even greater poignance. “You realize the human connection is so close,” Downer said. The director wants audiences not to see the animals in a way that turns them into a spectacle, but in a way that we learn from them. “People are realizing the value of the world and reflect [on] what’s important.” Downer cites reports of clearer air in the wake of current events and sees animals as not hiding like they usually are. “At this moment when everyone is reflecting, it’s a perfect time to realize what the real world wildlife is like and what those communities of animals are like.”

“Serengeti” is available to stream on Amazon Prime Video and Hulu.