Two down, three to go. The Television Academy hosted the second night of its Creative Arts Emmy Awards on Tuesday, celebrating 16 categories of Variety programming, with further installments of the awards show scheduled for Wednesday, Thursday, and Saturday of this week.

Expectations were (marginally) higher for the night celebrating Variety programming after Monday night’s show, the organization’s first attempt at a socially-distanced pseudo-ceremony, left plenty of room for improvement. While the bobbles were relatively minor — a presenter’s hand was in full view while self-recording, a two-time winner had their pre-taped acceptance speech aired back-to-back, the In Memoriam was confusing and potentially exclusionary — they gave the entire production a cobbled-together air, but one easily fixed with a little editorial oversight.

As for the latest batch of winners, there were very few snubs or surprises on paper. Perennial favorites including HBO’s “Last Week Tonight with John Oliver” and NBC’s “Saturday Night Live” both ended the evening with three awards, while VH1’s “RuPaul’s Drag Race” nabbed two more awards to add to its two from Monday night, and a pair of ABC productions “The Oscars” and “Live in Front of a Studio Audience: ‘All in the Family’ and ‘Good Times’” also scored two trophies.

In truth, the real surprises on Tuesday night came not from the winners, but the production itself, never an auspicious prospect. So without further ado, here’s the latest batch of the 2020 Emmy surprises and snubs:

If you watched Monday night’s Emmy event (you didn’t), you’d know that the entire affair lasted less than an hour, coming in at a cool 55 minutes. On Tuesday, the TV Academy apparently decided to “hold my beer” itself by giving out 16 awards, acceptance speeches and all, in 47 minutes. I’ve been in a drive-thru at In-N-Out for longer than this Emmy ceremony took.

While there’s something to be said about brevity, at some point it just feels like they aren’t taking the job of announcing the most prestigious awards in television seriously enough. And while I was willing to cut the Academy a lot of slack for the impossible situation they’re in — what with trying to put on six events in seven days — there’s no excuse for phoning in something that could very well serve as the pinnacle of someone’s professional career. 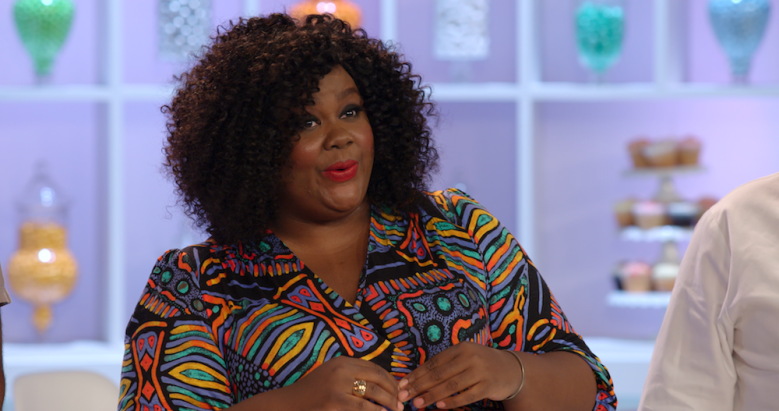 Part of that unshakeable feeling of disinterest likely comes from the fact that even though this was only the second night of the Creative Arts Emmy Awards, the ceremony was already well into reruns. Relatively early in the (47-minute) event, a segment about the TV Academy’s internship program ran. Or rather, ran again, as repeat viewers saw it for the first time last night. It felt a little gauche, but if you consider it as a form of in-house advertising, it was largely harmless.

However, it was when the event repeated the exact same In Memoriam segment that things got truly infuriating.

During Monday night’s ceremony, the In Memoriam segment was slightly confusing, featuring a continuous crawl made up of the names of people within the industry that had died in the past year, with only select breakouts featuring an individual’s name and photo and select credits. It was unclear why certain people were chosen over others, given the wide variety of their careers, but I had hoped the method of the madness would be made clear over consequent nights.

And it did. Because there is no method. Tuesday night’s In Memoriam was exactly the same, beginning with “Mythbusters” star Grant Imahara, including drag performer and “RuPaul’s Drag Race” alumnus Chi Chi DeVayne, concluding with “Saturday Night Live” music producer Hal Willner. (As a bonus add, the segment also misspells the name of Wilford Brimley.)

This seems obvious, but if you have a series of events taking place over five separate nights, there is plenty of opportunity to create a unique segment for each celebrating the lives and legacies of lost creatives. It makes little sense to reuse the same clip, highlighting the same handful of individuals, and egregious to not even spellcheck the names that you’re including — even if they’re mired in the background.

A “blink and you’ll miss it surprise” was a reference to a somewhat controversial image featured on the mask of Emmy Award-winning director of “The Voice” Alan Carter.

While Carter was giving audiences a (very interesting!) behind-the-scenes tour of the expansive control room used to film the socially-distanced finale of the hit NBC singing series, he showed himself thoughtfully using a mandated mask while indoors, emblazoned with a Thin Blue Line flag.

The imagery can be seen as problematic: Designed as a symbol of solidarity with police forces, the flag has since been co-opted by some white supremacists and used as an unofficial emblem of the “Blue Lives Matter” movement, which suggests that a person’s career choice should be considered as sacrosanct as their race or gender with regards to protections under hate crime legislation.

While supporting the police is not inherently controversial, it’s a curious choice by the Academy to include such questionable imagery in the edit while going to such great lengths to assure everyone that they’re committed to inclusion and boosting the voices of individuals often marginalized within both the industry and society at large. IndieWire reached out to the Television Academy for comment about the inclusion of Carter’s mask. 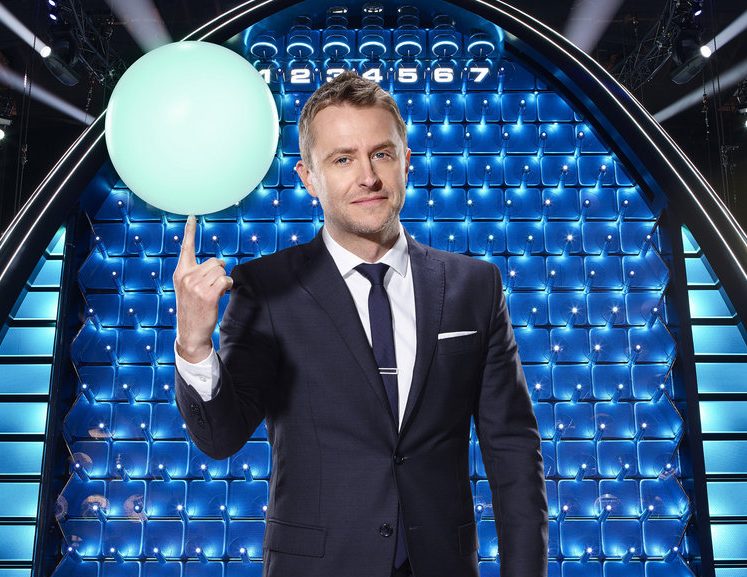 If you haven’t seen Chris Hardwick around lately, there’s a reason for that. In 2018, Chloe Dykstra, an ex-girlfriend of the “Talking Dead” host, wrote a blog post accusing an unnamed ex of emotional and sexual abuse with enough details that readers ascertained that she was alleging Hardwick.

The post launched investigations at AMC, where Hardwick hosted shows, and Nerdist, which he helped found. Ultimately he was found innocent of wrongdoing. Dykstra did not participate in either investigation.

Hardwick was sidelined for a few weeks before returning to his job duties, and on Tuesday he received the imprimatur of the industry by taking centerstage at the Creative Arts Emmys to present the final two awards of the evening. IndieWire reached out to the Television Academy for comment about Hardwick’s selection. 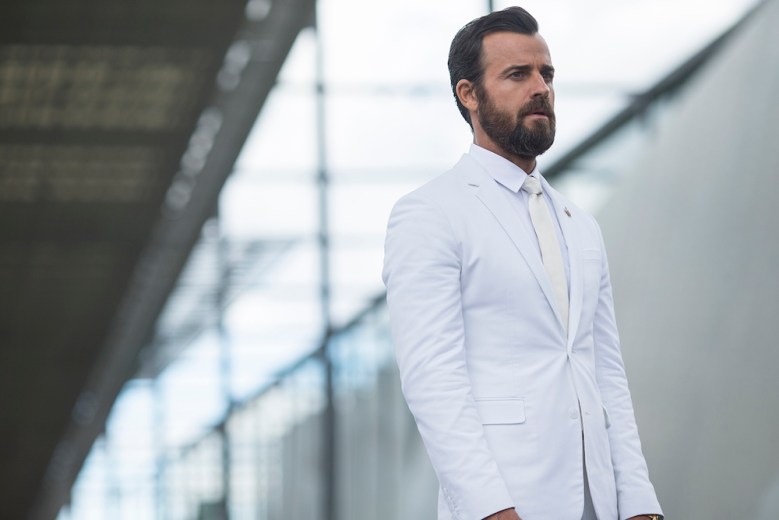 Justin Theroux in “The Leftovers”

And finally, some actual good news. It wasn’t the way we expected but Justin Theroux, who had his titanic performance on HBO’s “The Leftovers” overlooked in each of its three seasons — He wasn’t even nominated — now has two Emmy Awards, all thanks to Norman Lear. Theroux serves as an executive producer on the live variety specials and newfound Emmy darling “Live in Front of a Studio Audience,” and for his efforts has been roundly rewarded.

One more, guys. Then we’re even.

The Television Academy introduced a Creative Arts Emmy ceremony like no other Monday night, a pre-taped affair that ran less than an hour and awarded 17 different categories for Reality and Non-Fiction programming. The event was the first in a weeklong effort to present socially-distanced ceremonies that celebrate the art of TV while still encouraging safety and sanity in the face of the ongoing pandemic.

And while the ceremony itself may have looked different than previous years, there were obvious upsides, including the fact that this year the viewing public actually has the opportunity to see each and every Emmy awarded — something not possible in typical circumstances, where the Creative Arts Emmys would be dispensed over two nights in a non-televised ceremony with a cut-down version maybe running on a cable network.

What is the same to prior years, however, is the inevitable snubs and surprises revealed with the announcement of winners — and subsequent losers. If you’re a busy person that just can’t make time for a 56-minute ceremony, here’s the six snubs and surprises in the wake of Monday night’s event:

With a record 160 Emmy nominations this year, it’s not surprising that Netflix ended the first night of competition with the most wins. But what may come as a shock to some is the fact that not one of the streamer’s five wins came from its infamous documentary series “Tiger King: Murder, Mayhem, and Madness.”

Perhaps the first breakout hit of quarantine, “Tiger King” took the world by storm as viewers were drawn into an unseemly web of exotic animal hoarding, missing limbs, and murder for hire. The endeavor was such a hit there are now not one, but two different projects currently in development to adapt the greater “Tiger King” narrative into a series, starring Nicholas Cage and Kate McKinnon, respectively.

It appeared that Emmy voters were not immune to the off-kilter charms of the series, awarding it with six nominations, but as “Tiger King” went 0-for-3 on Monday, it seems like there might be a limit to the TV Academy’s love.

Instead, Netflix’s wins spanned a number of different offerings, including, “Queer Eye,” “American Factory,” “Don’t F*** With Cats,” and “Cheer.”

When Emmy nominations were announced at the end of July, it was a delight to look at the nominees for Outstanding Narrator and witness a host of diverse voices, including stars of film and, uh, sport, Kareem Abdul-Jabbar, Angela Bassett, Lupita Nyong’o, and Chiwetel Ejiofor. Of course, those nominees were competing against a ringer in David Attenborough who, with his Monday victory for BBC America’s “Seven Worlds, One Planet,” has now won the category in three consecutive years.

In fact, many of Monday’s winners were whiter than a person might expect given the seemingly increased inclusiveness of the year’s nominees — to the extent that the ceremony itself had at least one segment dedicated to boosting underrepresented voices in the below the line fields that populate so much of the Creative Arts Emmys. 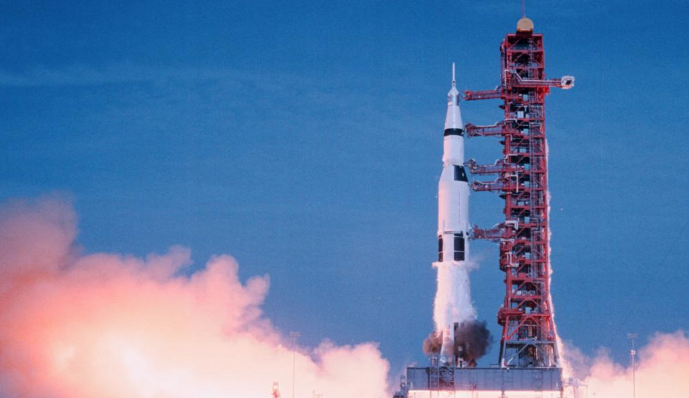 It was just a really good night for projects with the word “Apollo” in the title, including CNN’s “Apollo 11,” which took home three awards, as well as HBO’s “The Apollo,” which won Outstanding Documentary or Non-Fiction Special.

Another documentary series that took the pandemic by storm, ESPN’s “The Last Dance” didn’t manage to clinch any victories at Monday’s ceremony. The series, which was pushed up two months in part due to audience demand, traced the final season of Michael Jordan’s tenure with the Chicago Bulls as they pursued a sixth NBA championship. Paired with the blanking of “Tiger King” and Michelle Obama’s “Becoming,” maybe voters found themselves put off by hype.

Similarly, Apple TV+’s much-touted documentary “Beastie Boys Story” went 0-for-5 at Monday’s ceremony, completing its Emmy journey almost before it began. But Apple TV+ wasn’t the only brand new player yet to strike first blood at the Emmys. Though nominated for far fewer awards for the first night of the Creative Arts Emmys, Disney+ also went home empty-handed, a disappointing launch for the streaming heavyweights.

Surprise: A Good Night for Network

Sure, Netflix was the outlet that scored the most awards on Monday, but it was also the only streamer to get any play at the ceremony. If Netflix won five awards, that means that 12 of the 17 prizes went to traditional network TV programs. While it can often seem as though streaming television is the primary place to turn for TV these days, networks including NatGeo, CNN, VH1, and others prove that your computer isn’t the only choice for getting quality programming, particularly if that programming is non-fiction.